The earthquake last night and the nuclear power plants in Fukushima

It was when I was going to bed last night that the big quaking with earth rumbling hit here. In a moment, the power went off. In the darkness in my room, what I did first was to grope for the cello lying on the floor. I found and put it into the hard case. When I knew doing that almost subconsciously, I was grinning myself. Ten years ago in the terrible earth quake hitting Tohoku, I had a big mess at my room in the office. There had been things like TV or books fallen on the instrument. That experience might have made me act that way as soon as that earthquake turned out pretty big.
Anyway, actually no damage. The power outage was the only event which reminded us of the big earthquake 10 years ago. I was concerned about the nuclear power plants in Fukushima which had never been under control but had been with a number of serious problems. So far as I listened to the news with a portable radio, it only said TEPCO, the power company in this area responsible for the Fukushima diaster, was checking if the plants were intact. Later, this morning, TEPCO has announced the contaminated water spilled out of the reservoir(s). It said "so far as now" the plants were intact. They were planning to pour the contaminated water into the ocean. How much polluted water has poured out is the subject to be discussed. They have not given any definite information about it.
Fortunately, no damage to us, the cat and furniture. Needless to say the radio gear was OK. In the big earthquake, the operation table was broken and the radio gear fell on the floor. Compared with that, this one was not strong enough to make me fear.
In the darkness, we slipped into the beds. I was listening to the news with a tiny portable radio. The darkness and cold atmosphere have reminded us of the experience 10 years ago. The power had been off for 2 or 3 days. The biggest concern was about the nuclear power plants in Fukushima undergone that terrible accident. Knowing it was not under control at all, I was concerned about what the earthquake damaged it if not at all. Most Japanese know that the statement "It is under control" the former prime minister Abe has made at the Olympic Games invitation meeting is a total lie. But I am afraid those in foreign countries might forget it or even believe in it. Again, it is a lie. The lid structure of the pressure vessel in a couple of plants are highly contaminated with nuclear substances, which makes it quite difficult to access to them. The demolition work of those plants won't be progressed as planned before. It may take much longer to finish demolishing and accomplishing decontamination.
I have fallen asleep in 10 or 15 minutes listening to that news and considering of the devastated plants. It turned to be brightly fine day today. The power was back on. Replying to a few mails from friends and family members asking about the earthquake, I have started a day. A few days ago, I have read an article that said there was a geological distortion still accumulated in the area north of the epicenter of the big earthquake. The quake last night was not due to that but an aftermath of the big one 10 years ago. We should get ready for another big earthquake which must come on in certain time. It is a matter of when it comes but not if it comes.
In the garden, ume flowers are still coming out. It was a warm day today. The garden will keep me so busy in the coming months. 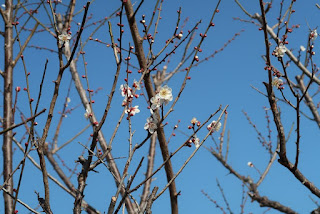