Recently, when I was looking for something in the living room, I found old albums on a shelf by chance. They were sorted out for each of the family members. I guess my wife has done it years ago.
There were old photos of myself in an album. One of them was uploaded in the previous article. It was taken at an excursion to a mountain with local ham friends, all of them pretty young, in my teen age days. That photo sure tells I have devoted myself to ham radio in my teen age days.
Before graduating a college, at the age of 20 years, where I learned mechanical engineering, I wanted to do with human beings but not with machines. It was a  choice to become a school teacher. I have liked doing with children. But I was more interested in studying medicine to be a psychiatrist. That will might be subconsciously formed because my parents and other family folks had been involved in medical care works even though there was no medical doctor around me. As a result, I have not become a psychiatrist but a pediatrician. It was tough for me to prepare for the entrance exam for a medical university. Getting it through, I have spent my twenties of age for studying medicine and, in the end of that era, training as a resident of pediatrics.
Once passing into a university, I was going to play some sport and also to do singing in a chorus. Not dreaming coming back to ham radio at that time.
It was the soft tennis club which I spent the first 2 years in the university. I spent that 2 years at the preparatory course studying liberal arts before the professional course in the later 4 years. Time was going by very slowly. Other than some classes of English, German and French, I have not been very serious at the classes. I have spent whole day on the tennis court. I was told to be the head of the preparatory course club in the sophomore. Mostly because I was actively attending the club almost every day. Not because of proficiency in tennis at all. The colleague club members of the same year classes, in medicine and dentistry, were friendly and not in hustle at all. This photo shows them in a summer camp. There were 2 or 3 guys beside them not on the photo. I am the 2nd from the right. We did not know what busy and hectic days would start in the junior for the professional training. The preparatory course for 2 years was called Ranch Kohnodai after the place name of the preparatory course. The students were like "cows" being kept in a ranch. In fact, we felt as if that slow and relaxing time would have lasted eternally. In my case, however, the orchestra club I joined in the fall of freshmen year would keep me even deadly busy. 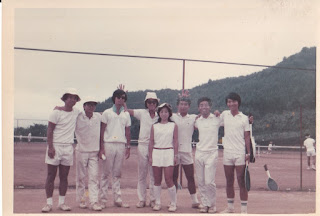 I used to tell my elder sister about my wish to start singing in a chorus at the university. In grimace, she told me not to do that but rather had better play any instrument at an orchestra. Her advice was a bitter sarcasm to me. At that time, I haven't taken it seriously but, in stead, have decided to join the university orchestra. The guy at the same dorm room in the preparatory course would like to take part in it as well. That friend of mine and I went to the club room together in the professional course campus in a downtown of Tokyo. In the room at semi basement, dark and quiet, I was asked what instrument I would play by a guy in the higher year. While my friend answered "oboe", I chose "cello" without thinking of that deeply. The scene of Paul Tortelier playing an unaccompanied suite of Bach was in my mind, which I have seen on TV at a summer camp of tennis that year. This was the moment when I was dedicated to this instrument throughout my life.
I was a real nutty cellist for the first few years. I should have spent more time and energy for basic training. But it was such a fun for me to play certain works like symphonies or pieces of chamber music that I played those genres of music more.
This photo shows the piano trio members. Both of the other girls specialized music, the left one with violin case, a very good violinist, who would be a concertmistress for a while in the orchestra, the middle girl, a great pianist, whom I have asked for chamber music performance in 20 years. The pianist used to join the orchestra as a cellist but has dropped off in a year or two. This photo was taken at a summer camp in Shinshu. 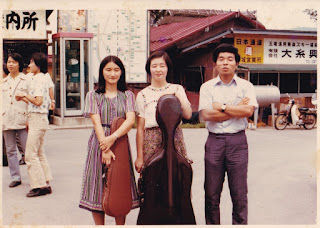 Another shot with the gang of the 2nd violin. The tall guy behind of them is a class mate of mine who also played cello. I don't remember why this photo was taken. Those 2nd violin girls were gentle and friendly. Not self-asserting so much as the 1st violin people... 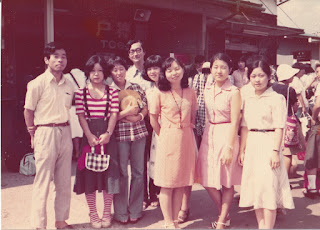 This shows most of the same year members of the cello part. The cello part has had numerous members that was enough to make 6 rows or even more in the orchestra. Each member was "a character" and enjoy parties at night in such a camp. Another unforgettable company. Oh, it is enough. These old photos have taken me back to my good old days. This orchestra activity was an essential part of the youth for me. It is not bad for me to recall things in those days. Especially, when standing before the harsh time of senility is starting.
Later, when I started working as a pediatrician, ham radio returned before me. It has been another chapter of life, I should describe it in another article.
Posted by Shin JA1NUT at 3:50 AM