A hint to improve Mercury by Bencher

I still have the contact problem with Chevron. Again, I tried to use Mercury from Bencher. As I wrote in the previous post, I had had unpleasant rebound feeling with this paddle.

When I held it with hand and handled the levers, I sure felt the excessive vibrating sensation on the hand holding it. It has a thin sheet of cork on the bottom supposedly to buffer the vibration. It was, however, too thin and too hard to work as a buffer. The vibration with keying being reflected by the operating table might enhance the rebound at the finger pieces.

I put a mouse mat for computer made of vinyl and gum beneath the paddle as the photo shows. It has clearly diminished the unpleasant rebound. Not perfect yet but quite usable to me. At the same time, the keying noise was also lowered. 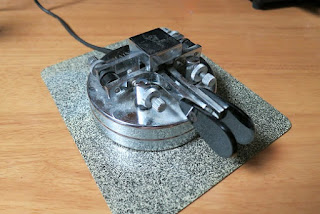 This paddle has no contact problem. So far, I would go on using this until I would like to get another, maybe, some model of Begali.

No excuse for my mistakes in keying for now.

As usual, I could not help saying that there has been much less activity of the ordinary conversation on CW than several years ago. The rotten band condition due to the ongoing solar flare also lowers it now.

Early in the evening yesterday, on the quiet 40 meters, I heard Ian VK3BJT calling CQ NET. No one answered to him. He has repeated calling again, when I made a brief call to him. I have recently met him on 40 meters several days ago. He belonged to the operators in good old days. We have had a pleasant chat. He sounded very happy because his daughter was going to marry in a couple of days. I just wanted to say hi to him again yesterday.

He told me they had had that QRS CW net on Tuesday and Thurseday. It was his turn to hold the net yesterday. To my inquiry how many guys always joined the net, he answered with laughter there was always at least one guy checking in the net. We have not talked any more of that topic since I knew it was the time of the net then. I was glad they were encouraging newbies on CW in that way. After we said good by, he again started calling the net.

I am still believing we are at the last age of CW communication, brilliantly ending its historical role and quietly placed at a corner of museum now. The days when we felt CW communication as the window to the outer world have already gone. The email or SNS etc has taken over the place in human communication. CW will continue to be as a game mode. But who cares for that? It is still the modern trend which no one could resist.

It is still good to know such a slow net is going on somewhere not far away, where the old timers are trying to deliver the technique of operation to the new comers. Some of them will appreciate the true pleasure to converse on this mode even if it won't change the trend yet. Staying in psssimism, let's maintain such an activity even if almost buried in the mess of cotest style QSOs on the bands.
Posted by Shin JA1NUT at 8:39 AM 4 comments: 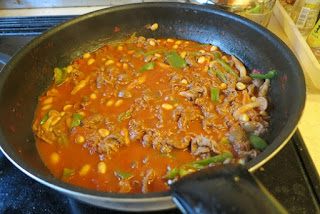 I wondered how to cook egg plant and radish abundantly harvested in the garden farm. This is pork, amply salt and pepper given, pan-fried with egg plant garnished with grated radish. It was seasoned with sesame oil, sake or soy sauce etc. Egg plant is very good for dishes featured with oil. My mother used to make egg plant with oil and miso, which she loved very much. We have enjoyed this dish remembering of that egg plant dish made by my mother. 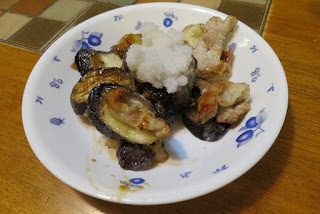 Needless to say that Bach has founded a basis for classical music especially with the counterpoint. Composers in later age seemed to have studies his works. In addition to Beethoven etc, Mozart has left works based on Bach's The Well Tempered Klavier. This piece is the 3rd work of KV404a Prelude and Fugue for string trio after that Bach's work. Lovely and beautiful music. In prelude, we could hear Mozart's beautiful melodies while, in fugue, there is solemn structure by counterpoint after Bach. The violinist, Arthur Grumiaux, plays smooth silky tunes.

Why I have remembered this piece was because I happened to find the score of this music in a huge box of music scores stored at my parent's house. There were a lot of Bach's solo and chamber music as well as some orchestral musics' cello or bassocontinuo part score. Such as Matthew's Passion. Yes, I was dreaming of performing such a great work. Though it seems to end in dream for me. Now I play cello for myself.

MERS, Middle East Respiratory Syndrome, is gaining attention here since it is in an outbreak in Korea. It reminds us of SARS infection around 2002/3. Like SARS infection, MERS is basically a kind of nosocomial infection. It is unnecessary to worry about it too much. But it could be a menace to those with basic disorders, elderly or medical workers.

The fatality rate is reported from 20% and even to 40%. Probably, since the populations have been the high risk group in this statistics. the real fatality must be a bit lower than this data. The pathogen is a kind of Corona virus which is akin to that of SARS. Unlike SARS virus, however, MERS virus is reported to maintain the capacity of infectivity between species.

The water front of medical services should be consious of this infection. Our MHLW seems to avoid the epidemic with quarantine operation. Like with SARS infection or the swine flu having prevailed in 2009/10, the shoreline operation won't work due to their incubation period. The target to deal with this infection should be the general communicty hospital/clinic. They should make a plan to do with patients of this illness on the hypothesis that the pathogen is already withing the country. I am afraid the authority is slow getting ready for that, which will result in a panic once there is any patient found in the community.

The symptoms of MERS infection is pretty similar to flu. The strategy against this infection is the same that for flu.

Such serious viral infection of different kinds is reported to occur once a few years. The battle against infectious illnesses has not ended at all.
Posted by Shin JA1NUT at 7:39 AM No comments:

I know that the good old days have gone. But I still call CQ, after having finished pulling the weeds in the garden, on 40m around our sunset for a few times. As expected, no takers at all. RBN says the band is still open to NA and OC.

It convinces me there are much less on the air. The situation is the same whenever I may watch the band. Having a glass of beer, I still dream of the good old days when I could find someone who lost the chance to go for sleep or who woke up early in the morning. Now there is no one like that.

The band is exceptionally quiet. Very few noise. AK4Z and WA7HJV have chatted on 7027KHz in QRQ regularly around this time in a day a few weeks ago. They are not heard, either.

I still dream of the good old days gone far away.

It is the time for me to prepare dinner for now.
Posted by Shin JA1NUT at 5:36 PM No comments:

How I am getting along.

It has been a couple of weeks since I made the last post. I have been recovering from the injury on head. It is amazing that it has taken me so long. It may be due to the seriousness of neck injury while it is partly due to my age. Anyway, I am still enjoying gardening/farming everyday.

Unfortunately, I noticed how dangerous it was for me to drive on the way back home from the ensemble practice. It was an entirely pretty dark road where the traffic ran faster than the legal limit. I have had a few occasions when I was near to an accident. i could not help but giving up attending that ensemble. I only wished it had been nearer to us. My wife was a bit sad to lose the chance to be in the harmony of the ensemble. I should look for another  ensemble where we both could enjoy ensemble together.

I am coming back to the unaccompanied suite by Bach again. Brahms 1st sonata is another tune I am regularly practising. It is fun for me to think out how to improve my performance. Without thinking of performance in the public, concentrating on the instrument and the musics is really good.

Tomatoes are getting ripened in the garden farm. Cucumbers have been regularly cropped. I have harvested the very 1st radish today. Egg plants have also been taken. A few Pumpkin, Watermelon and potato are getting grown as well. Fresh lettuce has been served for salad everyday. We have been blessed with all these crops.

I would post new articles when I could do that. Thanks for visiting here with patience.
Posted by Shin JA1NUT at 1:11 PM 2 comments: