Facebook has been busy with the posts on the 1st presidential candidates debate in the US. It is not my own business but is still of concern to us since the leader in the US will be one of the major leaders in the world.

He has also mentioned of the financial burden in NATO. He insisted that 70% of the budget is born by the US. I believe it is not correct, either. So far as the internet told, it is about 22% of the total. The rest is spent by the other 27 countries.

I understand the military alliance is not only a matter of financial burden but of the other important matter as the lives of the personnel etc as well. But his statement was not correct yet. The free ride theory of the Japan US Security Treaty by Japan is not correct. I wonder if he and his team won't check the fact before making such an address.

He also recommends us to be armed with nuclear weapons. Our ultra right politicians ruling our country will be pleased to do what he says. It will cause another nightmare. Won't he foresee such an event in the near future?
Posted by Shin JA1NUT at 3:44 PM 8 comments:

I have made Japanese style Marron Glace. One kg of chestnuts were boild for short time once. The hard shell was peeled. This process was a bit laborious. Then they were boiled "6 times" in order to get rid of the bitter taste. Soda was not used. They were then sweetened with sugar. Bitter inner skin was much preserved. But it won't taste bitter any longer. Rich bodied taste with elegant sweetness. Canned could be stored for several weeks. 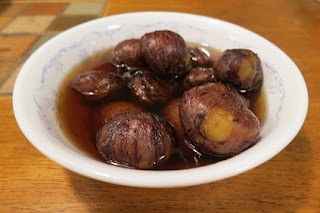 Mid fall getting closer to us

It has been rainy for the past several days. As it rained once, fall has advanced here. All the plants in the garden have slowed down their growth. It seems they are getting ready for the arrival of winter.

The garden has been neatly cleaned. The chestnut tree has been flourishing with baskets of the fruits. I have been collecting fallen chestnuts and storing them in refrigerator. 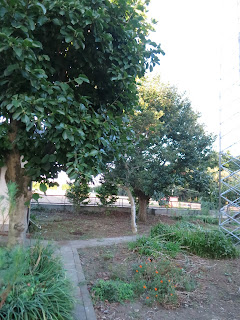 It has been a long time since I last renewed this blog. I would write what I have thought of ham radio as well as this blog in a post coming up soon. We have been getting along well. Time is flowing away fast and uneventfully.

Speaking of fall, it is the time when we should listen to Brahms. His last symphony is suitable for this season. This performance conducted by Kurt Sanderling has been my favorite since school days. Fairly slow tempo and singing every note. Listen to the theme played by violins in the 1st movement. Sanderling keeps the Auftakt tenuto. It really sounds like sighing by music.

Spending the last chapter of life, I feel I could understand and sympathize to this music even more than ever.