Mugon kan, how should I translate it into English? It is an art museum which displays the pictures of young art students or of young painters who have gone for compulsory service and died in the WWII. It is in Ueda City in Nagano Prefecture about 4 hours drive from here. I have seen a TV program showing this museum and the pictures displayed there some time ago. It made me feel I would visit there by any means. It was very fine and cool today. The best day for such a drive. The only misjudgement was that it was a week end and the traffic was a bit congested in an area in Nagano. Anyway, I have headed to that museum in the morning today.

It was located on a top of a hill in the suburb of Ueda City, which was surrounded with mountains all around. The building was 50 ft or so away from the parking lot. Only several cars have parked there. Surprisingly, some of them were from Saitama or Kanagawa, almost of the same distance from my home. This may mean it was not very popular among people but still attracted some people not only in the local area but from many places in the country. 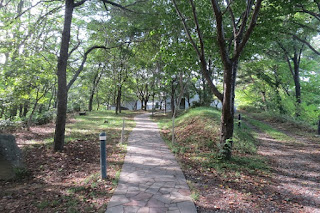 This seemed to be a monument of the young painters dead in WWII. Their names were engraved on a palette shaped stone at a corner of the museum. 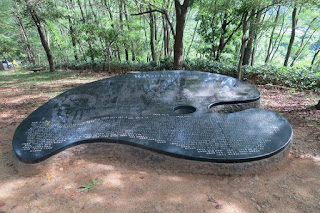 The building of the museum was like a church. Not gorgeous but sound and steady appearance. 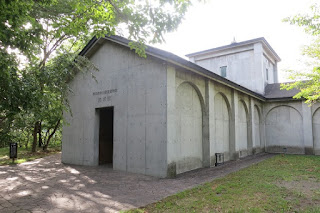 It was forbidden to take photo of the works and letters etc displayed inside. The pamphlet is as follows; 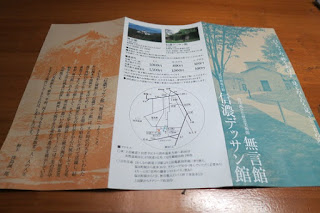 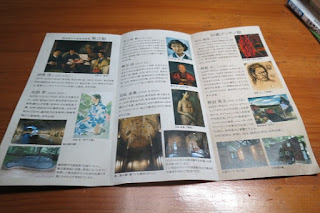 It was dark inside and the pictures and letters were shed light. No noise nor talks. A dosen of people were looking at the works there. They were watching them intently without speaking anything.

Most works were rather small but sure attracted our eyes. One of nudes was captioned as the model had been the painter's wife and the painter had told he would go on painting it for another 5 or 10 minutes. He was urged to go to war when finishing painting his that very last work and never came back home.

Watching each work, I noticed tears had dropped from my eyes, imagining how regrettable the young painters were leaving their artistic activities and dying away from their families. Most of them were killed within the last 2 years of the war. Some of them were dead due to illnesses in the war. I remembered among 3 million people, soldiers or civilians, killed in the war, more than half of them have died due to illnesses or malnutrition. The nation would treat us in this way once war started.

Staying quiet there, this museum was much more eloquent against war than any demonstration or any abstract discussion protesting war, I thought. And I believe there were even more talented young people in Asia/Pacific area and in the US/allied countries who had been killed by the invasion of the military of our country in WWII. We should never forget of that fact as well.

Mugonkan stands for a museum without speech. The works and the records of the young painters themselves would move you without any political address or agitation. I thought it was how they had named this museum. In my view, this museum should be called a museum of silent palette. The palettes which won't be used any longer would appeal by themselves what those young people wanted to do.

On the way back home, I have gone through the concourse before the railway station of Ueda. It was the place where I and company of med school took off a train and tool a bus to a hospital in the mountain area. We have had summer holiday training at that hospital for a few days. Over 40 years ago. Most of us are retiring or have retired from profession. I could not help but remembering what has happened to me in that period. Now I have finished my career as a doctor. 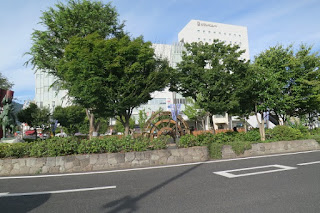 It has undergone a big change since that time. There was still a kind of atmosphere we had had in our medical student days.

It deserved making this trip even though it was a bit tough one for me. Purchasing some souvenirs to my wife, I headed home on the high way. Sun was already sinking.
Posted by Shin JA1NUT at 9:32 PM No comments:

Indian lilac is blooming again. It has started blooming in the end of last month. In my image, it is always flowering in the late summer. It has been deadly hot since last month. That is why it has bloomed earlier than usual. 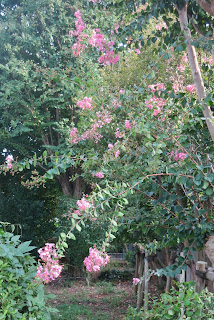 This again reminds me of my father who used to plant it there about 3
decades ago. Having lived the same length of time as he had here, I fully undersatand what he has thought of and has worried about. I should have sympathized him when he was alive. But it must be the way how people live and die. Soon, I will go into the eternal phase as my father did. Until that time, I am asked how to live for the next generation.

Seeing this flower coming out in the garden, I again think of such a thing.

Spending a lot of time indoor, though, due to the heat wave. It is a pleasure for me to listen to music and to practise cello for a while.
Posted by Shin JA1NUT at 5:47 PM No comments:

It is still abnormally hot here. In the mid daytime, it gets around 35 degrees C every day. Mariegold could have been most vivid in this season. However, some of them are dying right now, especially those in a corner having sunshine all day long. 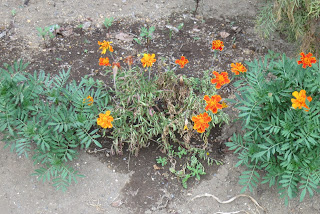 I could not help bitterly smiling to see no one is denouncing at a post in Facebook which claims of the importance of manuver against climate change. I just wonder if we have not passed the point of no return yet. I really hope the leader in every country will take active action for this problem. It would take decades to have response from anti global warming procedures. It is for our next generation.

Sweating a lot in the garden, I have poured water to trees and tomato plants etc. And I have pulled some weeds. I found it was quite tough to do that and finished it halfway. Coming back into the house, I had a glass of ume juice diluted with carbonated water on the rock. It is a home made one. Nothing is better and healthier than this one. 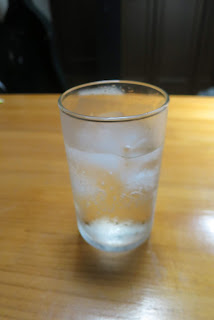 In the shadow, there is a bit of breeze blowing, which may usher in the arrival of fall. Is it too early? One month has passed since the summer solstice now. Maybe, in the end of this month, that sign of very early fall will get evident.

Perssimon is growing on the tree. It may offer us sweet fruits in fall. 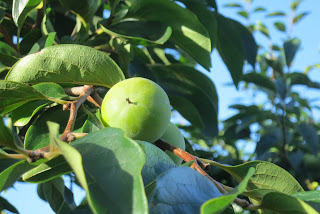