A nurse friend and a temple gate nearby

I went for lunch to an Italian cuisine which is owned and managed by a friend couple about 30 minutes  drive away from home. Before the Corona pandemic started, I had visited there once several weeks. It has been several months since I last went there this time.
The mistress came to greet me. Recently, her husband has undergone an endoscopic surgery for hernia successfully. I have known both of them for almost 30 years since they had a restaurant in the hospital I was working for. I often took lunch there.
She told me our mutual friend sometimes visited the restaurant and she had rumored about me with her in her recent visit. That lady, named K for the initial, used to work with me at the outpatient clinic ward of the hospital. K has become a nurse when one of her parents got sick with some illness. Maybe, in her thirties. K was a competent nurse. Most impressive was that she was fair and righteous to anybody, even if she was doing with the president of the hospital. And we have had a lot of quarrels at the work. No conversation for a few days like a real couple. But in sometime, we got friendly each other again. I can't remember for what we have had such quarrels. Maybe, something trivial. Considering her fairness and righteousness, I have asked her to work at my own clinic when I planned it. At first, she said OK and even made a grand design of the clinic building. Later, she might think it was beneficial for herself to remain at the hospital, a bigger facility than my pediatric practice. Her position might be much more stable there as she thought. She didn't come to work with me. I was sad but fully understood of her situation. Another nurse and a nurse aid were applying for the position at my office in stead. Since I quit the work at the hospital, we have exchanged season's greeting post cards for a few years. But nothing for the past 10 plus several years for now.
The mistress told me she was still working at the same hospital and was concerned about me. Because I have closed my own practice in 17 years. She might know of that. As the mistress told me, she seemed to look the same as before except for whole hair becoming grey. Maybe, a bit chubby but always with her shining smile.
I was happy to hear about her. She was curious to know how I had been doing. I told the mistress to tell K I have been working as a house husband ever since. I sure would visit K at the outpatient clinic and renew our friendship. She must be over 70 years of age for now.
On the way back home, I visited a temple, exactly, a gate of an old temple. I have seen it on the way to that restaurant or to the hospital I used to work for.
It is named Choei ji. It was founded in the 9th century. The original buildings were lost. A local castle owner in this area has built the temple again in the 17the century. Only this gate is left for now. 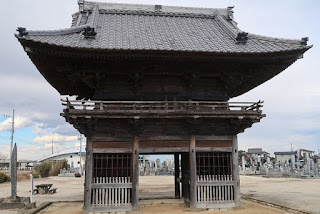 The gate is named Cherry Gate, pretty grand appearance. The tile roof must be renewed in the later era. The building itself is a really gorgeous structure. 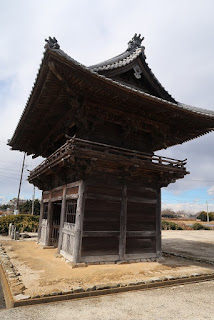 The woodworking of the building is really impressive. 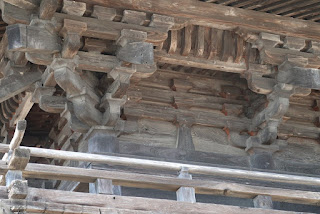 I am sorry the other buildings were already lost. One of them has transferred to a town nearby. I would visit there sometime. People in this area might treasure this temple gate for a long time. That may be the reason why it is still preserved. They should be honored.
Posted by Shin JA1NUT at 6:29 PM