It was my mother's 10th anniversary a couple of days ago. Her memories are renewed in my mind every year. Feeling it was enough to mention about her in this blog, I could not help referring to a poem by Hermann Heuvers, a German missionary in Catholic, and the president of a university in Japan. He has liveded in Japan from '20s through '70s. His biography tells he has passed due to heart attack when serving a mass at a church in 1977 at the age of 87 years. My sister has sent me this poem at mother's 7th anniversary. Even though I quit Christianity in my 20s of age, this poem touched my heart so deeply that I could not forget it.

It is titled as the Best Work Done in the End of our Lives. It was written in Japanese and all I could do is to translate it in my poor vocabulary in English here. The original is written in noble and simple words in Japanese.

He starts asking us, in the poem, what the best work you could do in the end of our lives. Getting old with cheerful mind. Taking rest while you would go on working. Holding your tongue even if you would like to chat. Staying hopeful when you are inclined to despair. Loyally as well as quietly, carrying own cross on your back.

Not envying at young people who are vividly walking in the God's way. Humbly accepting the kindness of others while not being able to help them. Staying kind and gentle even if you are weakened to help others.

The burden in the old age is a gift from God to you.

It will brush up your mind. In order to have you leave for the real homeland. It is a real hard work to release yourself from the chain which binds you to the present world. When you could not do anything, you should humbly acknowledge it.

God leaves you the best work in the end of your lives. It is praying. You could not do anything with hands but fold your hands for praying. In order to pray God his grace and comforts to those whom you love.

Completing all the things, you may listen to God saying; "Come on to me, my friend. I would not abandon you."

I might have beautified my mother. But for the last 10 years or so when she suffered from Alzheimer, she has lived in this way. I always brought breakfast to her at the house where she had lived alone after father passed. She always sat at the table and sometimes prayed. She has lost her recent memory but has been concerned about her friends and family members, especially, about us. I was sure she had prayed for us all. It was a scene serene and divine. I could not forget it. I believe my sister has had the same impression on her life in the later years. That was why she had introduced this poem by Heuvers at that anniversary.

In a few weeks, I will add a year to my age approaching in age to my parents when they were with us here. I am feeling this poem says what I should do in the coming years of my old age. 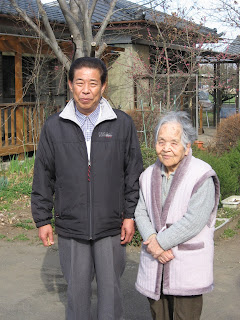 My mother with a family member visiting from Tokyo in 2007.

Azalea is fully blooming along the entrance of our home. 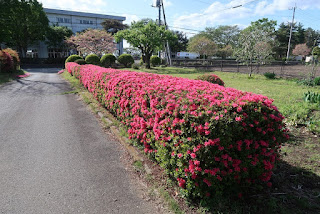 These flowers were planted here in several years since we had moved this place. I don't remember who has done it. At least, I haven't been involved in it myself. My father or someone he asked to might have done this job.
Then, my father was as old as myself at present. I could finally imagine what he thought at that time.
He has also planted this kind of azalea at the parking lot of my clinic. It always looked as if a carpet of gorgeous bright red in this season every year.
I only bow him with hearty thanks.
Posted by Shin JA1NUT at 7:51 PM No comments:

A treatment candidate for COVID19

Raloxifene, an estrogen receptor modulator, is reported to be a candidate for treatment for the early phase or for the asymptomatic infection of COVID19.
It blocks the function of RNA polymerase and of protease which are necessary for virus invasion and replication into host cells. It seems to work for any RNA viruses like SARS CoV2 or Ebola etc.
This medicine is already widely used for osteoporosis in menopausal women and is known to be safe. In addition, it has generics not costly.
It's mechanism to inhibit  SARS CoV2 has been understood only with experiments and in vitro studies. We should wait for in vivo results preferably by RCT.
https://youtu.be/c4DF7aT80fY
Theoretically, it could work for the mutant strains. In Japan, the vaccination is badly delayed, much less than expected. In Kansai area, B117 strain is surging up at present. It could overwhelm the medical service system. In this context, such a drug as Raloxifene is widely needed.
Of course, it should not be used without regulation. It is used for those with osteoporosis, gynecomastia and so forth. Once it turns out of use for COVID19, it should be manufactured enough to satisfy the necessity.
Posted by Shin JA1NUT at 8:07 PM 1 comment: