Late at night a few weeks ago, when I bored with practising the 7th symphony by Beethoven, I turned on the rig. It was before 14Z. Pretty late for the path to the west coast on 40m. The band was still open that way and I could have a few contacts with W6/7.

For the last time before closing down, I called CQ and was called by VK4YD. This call sounded familiar to me. But I could not recall Dave until I looked up his call with my PC log. We have had several QSOs years ago.

He used to be VK3ABR before '80s and VK4CEU there after until he got the present call sign some 10 years ago. I met him first time in 1968! He is 81 years old now and still have very sharp memory. He told me he had just called our mutual friend Tim VK3IM on the land line. Tim told him he had been getting along well at his home with aid for routine by someone. Tim seemed to have been at his own home in Mt. Eliza, a suburb of Melbourne. As I have written elsewhere in this blog, I have had wonderful chats with Tim on his way back home from the work in Melbourne. Tim has had, however, the same health issue of chronic pain which annoyed him for the past years. I only wished him peaceful days with less pain now.

In '70s through '80s, Dave told me, there had been several hams in or around Melbourne area who used to be active on 40m at their midnight. Such as Ron VK3BRC, Frank VK3FC, Snow VK3MR, Tim VK3IM, Dave himself and so forth. They have called themselves as "night owlers". They have enjoyed QSOs with Ed W7COB or Merle K6DC, formerly W6ULS then. What a surprise I have worked all of them either in '60s or '80s. Merle used to be an elmer for ragchewing for me those days. Sadly, all of them except for Dave and Tim have gone SK for now.

As I repeatedly posted in this blog, there used to be a schedule between K6NB and VK2NS on 40m around 08Z or so almost every day. There used to be several patticipants in it around the Pacific ocean. I was the last one joining it from time to time. It was a real fond memory for me. I am sad to have shared it with very few ones for now. I was, however, delighted to know this night owlers group having kept a regular round table over the Pacific Ocean at almost the same time, or at least, sometime in common. CW was taking the place of the internet at present those days. Ham radio, especially CW, was the only window open to the world for me and for many young people those days.

Wondering if there were any people who knew of these round tables over the Pacific Ocean, I posted on this topic in a group of CW lovers in the facebook. But no one has shared this memory with me there, even if they were mostly newbies on CW in that group. Anyway, the fact there used to be such hams enjoying ragchewing over the Pacific Ocean is passing into oblivion. There is still a memory that I have participated in such excitng groups on this old mode those days.

Fall is ushering in quietly

There are so many things to write about in this blog. However, I have been too busy to concentrate on it now.

One pleasant thing. When I pulled and cut the weeds in the yard, I have mistakingly give a cut to a small water melon with mowing sickle. Luckily enough, it turned out to be ripe. It tasted elegantly sweet and fresh. Needless to say it will be a desert after evening meal. 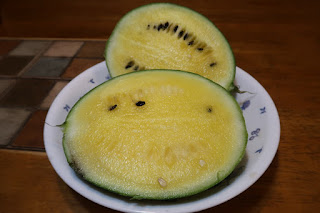 The traditional calendar says the fall season has started August 8th. Several days later than that day, it surely has become cooler in morning and evening. It may take several weeks until we feel fall in the air. But the cool breeze early in the evening ushers in the arrival of fall soon.

Tomatoes are past the peak of harvest for now. We still enjoy several fresh ones for the dinner salad. It has been a good year with them this year.

It is the 74the anniversary of nuclear bombing in Hiroshima today.

This photo shows a boy carrying his sister died from the nuclear bombing in Nagasaki. He was waiting for her turn at a cremation site. His attitude, looking straight forward with his mouth shut tightly, tells what an absurdity he should endure at that time. 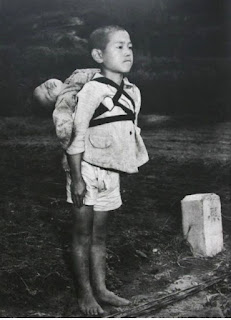 The Japanese government at that time could have surrendered to put an end to the war much earlier. The cult of imperialism has daren't do that in order to maintain the emperor system but never the lives of the people.

We should never forgotten the Japanese imperial military has killed tens of millions of people mainly in Asia and Pacific area. Together with the memory of the victims in Hiroshima/Nagasaki in addition to Okinawa, we should remember all those people killed in the war by our military.

Our government has declared our constitution won't necessarily ban the use of nuclear weapons recently. They should have ratified Nuclear Weapons Ban Treaty quickest among the other countries since we have experienced the tragedy of nuclear weapons and the accident of nuclear power plant in Fukushima. However, it seems they won't go that way. They rather would increase the tension with the neighbor countries.

Again, we should never forget what this boy has experienced in the tragedy.

World Meteorological Organization says last July was the 2nd hottest month ever. In 2016, it was the hottest month of July by the record. It was due to a big El Nino phenomenon. This time, El Nino was not so remarkable as it could explain of this heat. I am afraid global warming is steadily going on in the world.

The rainy season has finally finished here several days ago. The fine weather is welcomed after a long wet days. But the sunshine is too intense for plants to grow. The leaves of pumpkin are half withered. It might be to avoid direct exposure to the heating sunshine. This heat wave may deteriorate crops later, though.

A pumpkin was harvested the other day. It has been dried and prepared for a dish;simmered pumpkin with japanese broth and minced pork. 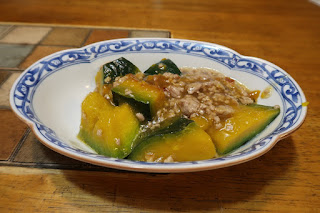 Pumpkin was not so sweet as expected. But it still tasted fresh. When a fresh pumpkin is first cut, it orders like a fresh fruit. Maybe, it has produced aromatic compound when growing.

Corns have been finished. With long lasting rain, it has not grown so much as we expected. But still sweet and crisp. Each grain of corn was freshly vivid. We call it lively cell membrane in our family. As soon as harvested, they have been boiled in a pressure cooker. 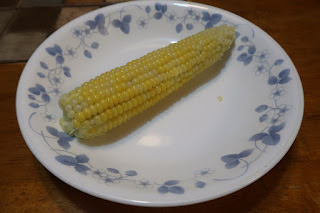 My father, when he was alive, used to make this boiled corn for us everyday. Bringing one piece, he went to the window of our daughter's room and whisper to her to wake up and to get ready for school. During her high school days, father used to take her on his car to school quite often. We should remember how our parents or grandparents have done for us. Unfortunately, we scarcely remember of such a thing while they are alive.

In the midsummer going on right now, I feel signs telling fall is ready to come. Such as withered corn plants in the farm or a bit cool breeze going through while pulling weeds. Time goes by slowly but steadily whether or not we are conscious of that.

Accindentally looking up the Indian Lilac along the entrance, I found some flowers had already come out. 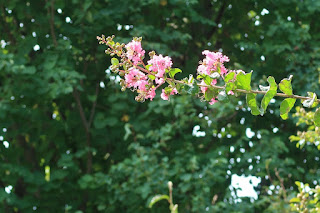