It's the season of Indian Lilac

The Indian Lilac at the entrance gate is blooming. My father used to tell us it was coming out in this season. Even though I can't remember how he told about it to us, I bet he might have been smiling then. It was impossible what he has thought about it then. Now, I could share that with him. Vividly and clearly. There is something we could hardly understand or sympathize at young age. 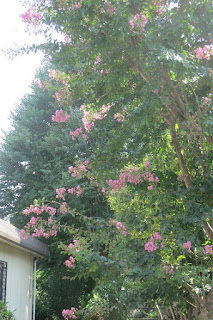 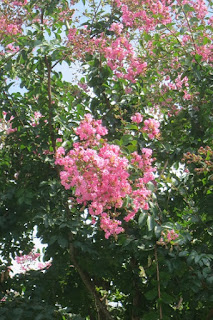 In a few weeks, hopefully, there will be cool breeze blowing in morning and evening.

I am still cooking dinner almost everyday. This is pork with eggplant seasoned with soybean paste. It was dished up on the leaves of perilla, an Asian herb, which gives refreshing odor to the dish. 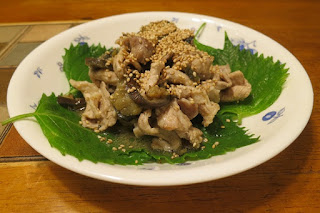 In commemoration of my history

I have a couple of bookcases of moderate size;apx, 1.2mx2.0m in my study as well as the room for radio, that is, the shack. They are too small to store all the books I own. But it is what I could set in my small room. Since I retired, I have added books of history and social science in them. Even though I have already moved most of the medical books to a storage room, a thought I might be forced to quit from medicine completely once I organize the bookcases and do away with the old medical texts etc has made me hesitate to do that.

However, the bookcases are almost full. I have decided to move several medical books left there now. I have scarcely read or looked up with them for the past years since retirement. And those medical texts are getting older in content in several years. Some of them were added to the bookcases even a few decades ago. 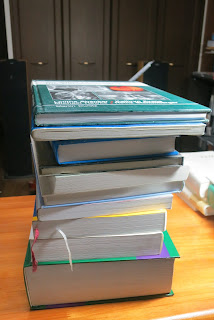 A couple of books remained in the book case. One is the textbook of pediatrics, Nelson's, famous for a textbook of pediatrics. It is a token that I have studied and worked in pediatrics. The other is a diagnostics textbook written by a professor whom I have been taught at the medical university. The field of diagnostics does with diagnostic procedure with very simple tools like stethoscope or hammer etc. It was a subject we had to learn in the beginning of clinical medical training. Almost half a century ago, CT scan has just introduced into the clinical services. There were only limited number of diagnostic tools or machines available. Moreover, the diagnostic procedures with very simple tools were really fascinating to us, medical students. Reading that textbook, I surely felt a historical atmosphere in it. Without modern medical equipment, the ancestors of doctors have made effort to reach right diagnosis with their perception and the simple tools. It was sure a historical heritage which was still useful to us. What an excitement to learn it! I know I won't read it for practical purpose any longer. It is, however, still to commemorate in my memory that I have studied medicine and worked for the patients. 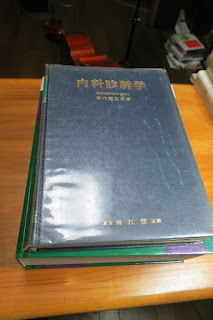 In the FOC reflector, there has been a discussion going on regarding sending CW. Some people claim that we should send accurate CW with proper dot dash ratio and spacing for some time. It helps the listeners to read us easier.

The problem may be divided into two aspects. CW sending should be accurate as if it were sent by keyboard. Dot dash ratio should be exactly 1:3 while there should be proper spacing between characters/words. The other problem is that such mechanically accurate sending is often boring to our ears. We appreciate musical rhythm in CW. It varies in time. We often feel comfortable with something exquisitely changing. It may reflect our heart beats. Anyway, that is why CW is called as an art.

Even though I admitted that such a discussion is not meaningless and is quite right, I felt a bit reluctant to go on such a discussion. This is the reason why I feel that way as shown in this post in the reflector.

Kidney beans named "Morocco Ingen" in Japanese have been harvested for the past week or two. Being boiled, it is served for salad. Soft and a bit sweet. Those sold in super markets won't taste that way.

I have cooked it with carrot rolled with pork. Seasoned with sweetened sake and soy sauce. Pretty good. 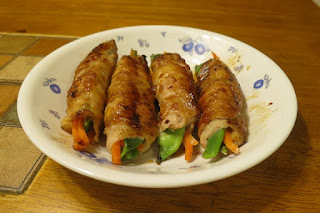 The garden farm will be into the time of harvest very soon. As often told, I feel blessed having a gust of cool wind touching me in the mid summer sunshine while working in the farm.

I was invited to an orchestra where I used to play cello a couple of years ago. A small ensemble. They might be puzzled not having any cellist in it. No matter what reason they have had to invite me, I was glad to come back into that cozy company. I felt really excited playing the fugue in the 3rd movement of Brandenburg Concerto Nr 4 by Bach. So far as I could, I would go on for such ensemble. It is the day for another ensemble in Tokyo. It must be a hard work to walk outside carrying cello. However, I would go there. I would play the Concerto for Two Violins by Bach. In that music, two violin concertants would sound like one instrument. It is another fascinating piece by Bach. I would smile at myself sweating much to travel to Tokyo with cello. However, it is one of the reason why I still live.

It will be my father's 13th anniversary in 3 days. My sister has written to me telling she had been reading the papers for application of pension of military he left to her. It says he has served in the army from 1939 to 1945, that is, from 20 to 26 years of age. His youth, which could have been most brilliant time in his life, has been forced to serve for the military nationalism.

He has been sent to China where he experienced the hell of the war and was almost dying in the battle. It was his regret that Japanese troops had done all criminal behavior to Chinese citizens over there. He has repeatedly told us we had owed much to them. It was his dream to travel Chine for a trip of apology, which did not come true.

Coming back from China, he was luckily assigned to an educational division of the army in this area. It meant he had been spared going to abroad again in the end of the war. Later, he might feel guilty for those having lost their lives abroad on behalf of him.

After the WWII, he has become a firm pacifist. It was due not only to his belief in Christianity but also to his cruel experience during the war. He must face to the problem of emperor system when he searched the cause of the war. It was the reason why the people have approved the invasion to the neighbor countries based on the aberrant idea of elitism. In the present time, studying of the reason why our society, at least, a part of the politics, is heading back to the regime before WWII, I feel we could not go without dealing with the problem of emperor system as a quasi religion which leads us to the nightmare idea of nationalism. I sometimes could not help smiling at myself reading the same kind of books as my father used to and thinking in the same way as he did.

On July 1st 3 years ago, the collective self defense was approved by the government, which has been the purported reason why a nation started any war in the past. Whatever the government might explain of that change in explanation of our constitution, it meant our country would go for war abroad in the future. I often wonder what my father would say about this situation.

Remembering of him, I would do what I could to protest against such movement in the politics. It was a bit muggy morning when I and my wife have been called for his passing by the hospital staff. It has come on all of sudden. How lonely he has felt when passing away. I would take over his pacifist position for the token of my apology for not being with him at that time. It is also important what a country we would leave to the next generation. Even if I could do little for that.
Posted by Shin JA1NUT at 7:44 AM 6 comments: