In a previous post, I have uploaded an old photo which showed the company of ham radio friends in a local club taken in mid 60s.
This is the photo taken at the same time. We were operating radio on a summit west of the downtown of Tokyo. It must be in the summer vacation. From lt to rt. JA1RHL, me, JA1OTE and JA1RIX. JA1RHL, later VK1ARA, is the only guy whom I could hear on the air or could get in touch with. There were several more in the group. It was a good old and brilliant day. It was a forerunner of SOTA in a sense even though ham radio operation was more emphasized. 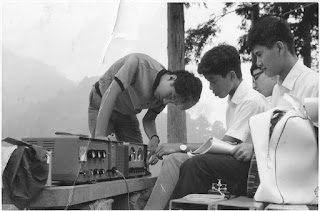 The transmitter was TX88A of Trio, later Kenwood. It was most popular AM/CW transmitter for HF. The PA tube was a single 807 running only 10W. A lot of beginners were using it, even though I could not afford this gear for myself. We have built it at the club station in the college I was attending to. The receiver was a double super hetrodyne  of Taiyo Musen, not in business any longer. The model name was possibly NT110 and apparently was imitating some model from Hallicrafter. It belonged to JA1RHL, who probably taught me how to use it on this photo. Again, I could not buy such a receiver and have built one by myself. It was a "collins type" receiver but has made much trouble with image interference that has annoyed me a bit.
There is a hand key on the bench. It seems we have mainly operated AM. At our home, we were mostly CW operators those days. Luckily or unluckily, I have been the craziest one for CW ever since except during '70s when I had the medical training. Probably the only one who still enjoys this mode.
Posted by Shin JA1NUT at 7:48 PM