On the way back home from the city south of here, I went through by the ancient tomb named Bentenzuka, which I have posted about before. 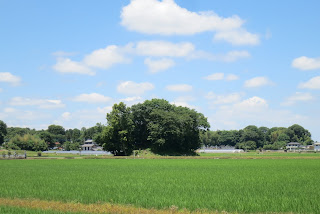 It stood among rice paddies as it used to. It was very fine with some clouds flowing in the sky. The clouds were typical for that in summer. Rice seemed to grow well. Very quiet place. 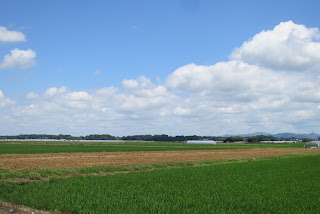 Rice paddies were spreading like green carpet. Again, cumulonimbus clouds were accumulated on the horizon. It is a bit too early for us to see such clouds here. The summer solstice is close for now, though.

My sister has given me a postcard, which has told she and her spouse would have the golden golden wedding anniversary next year. They are planning a ceremony at their home. She also added it had been only 23 years ago when we celebrated our parents' golde wedding. Time still goes by quietly as well as steadily. When I cut the weeds in the garden with a long sickle, I remember my father used to do the same thing only 20 years ago. I feel as if I could hear the sickle making ticking sound he made hitting the ground.

In 3 weeks, we will have the 14th anniversary of father's passing.
Posted by Shin JA1NUT at 8:31 PM No comments:

It is still in the middle of the rainy season even though a bit cooler than usual. If this cool wind coming from Kamchatka and Alietian islands, it may damage crops especially in the northern part of our country. It is called as Yamase, which has worried farmers in the area. The forecast says it will get quite hot very soon. And Yamase won't last too long. Crops might not be damaged.

Hydrangea are coming out in the garden as they always do in this season. They bloom at several places in the garden. Again, they have been a gift by my father. 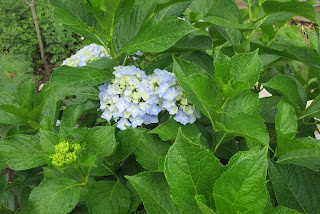 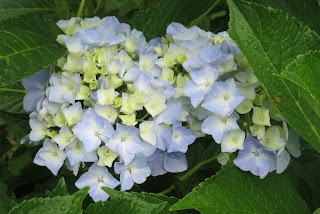 I have sown seeds of Marie gold harvested last fall at many places in the garden. They are budding now and may bloom very soon. They last until the fall. 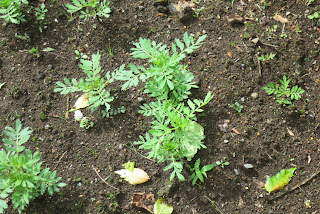 I am moving the strawberry plants from the former farm to a new place in the garden. The extended runners are pretty strong and would be settled down any places. Hopefully, they would bear so many fruits as they used to at the former place. 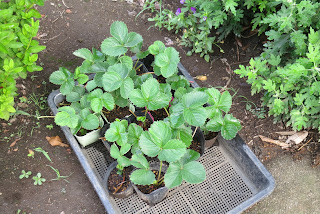 I am on a process of harvesting potatoes. Pretty good ones. I have given some of them to friends of mine, including the violinist friend who used to live in Germany for study of the instrument for a few years and has enjoyed potatoes over there. Possibly with a bit of lager as well.

By the way, the US vs NK summit in Singapore left skepticism about its result. President Trump seems to deal with the dictator of NK for reputation for the election while the dictator needed to negotiate for acknowledgement of their regime and possibly for economical support. Denuclearization and the detente in of the Korean Peninsula won't be an easy process. However, this first stem toward it. There have been any other choices than this agreement however unreliable and unconfident it may be.

I am so pleased to have the news mentioned above for my friends in Korea. For example, Lee HL2DC living near to the DMZ who told me he won't refuge anywhere even if another war started between N and S Korea. The people in the peninsula have experienced too much agony during and since the war there. It is the time for them to start for union of the same people again. I have a few more friends whom I have known through ham radio for the past decades. I would pray for further progress of detente process over there. It is a prayer for the real friends living there.

So far, I am not very active on the air. Something has changed in my mind. Even though I have craved for radio for years, I won't feel that way any longer. I don't know if it is a transient mood or a lasting change in my mind. Let's see. I would, however, spend an hour or so every few days. If you hear me somewhere, give me a buzz.

Scores stored and unrealized for years

Having slept long last night, I woke up in the bright sun shine early this morning. The atmosphere was crisp and cool. What a nice day! As I always do in the morning, I went out to see how the vegetables were growing. Everything looked fine. Tomatoes might be ripened soon. I have watered some of them which required water. It will be the time to harvest potatoes very soon. Corns were growing steadily. Sweet corn will be on the table not too long from now. 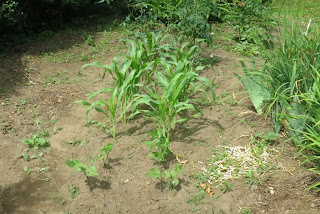 Very soon, there will be an off line meeting for ensemble held in Tokyo, which I have joined for several times. The piece they will play is OP3-6 Violin Concerto, one of the concertos "L'estro Armonico" by Vivaldi. I am not very enthusiastic for that piece for myself but have ever played it years ago. It seemed there were one cellist participating it and I thought I would go there if things permit me.

I remembered I had the set of part scores of this piece. It must be somewhere in the boxes I stored all part scores I had owned. They were kept in the storage house built by my father some 25 years ago. It is comparted to 3 rooms. One of them are for keeping books, old letters, QSLs and the other things. I found it there. 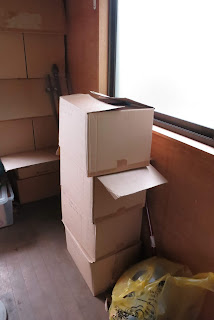 There were a lot of scores packed in these 4 boxes, sorted after the composers or the genres. I used to buy and collect them from score shops when it was not possible for us to download freely scores from IMSLP. Until over 10 years ago.

Some of them were obtained back in my med student days. I used to walk down to a score shop named Academia near to our school in lunch time or after classes. I forgot time passing while looking for any good score there. 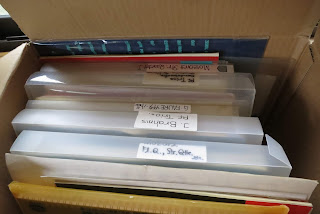 It is surprising that there were a lot of important works of chamber music at least  in the classic and romantic age among the collection. For example, in the genre of piano quintet, those by Schumann, Brahms, Shostakovitch and Faure. Two piano quintets of Faure.

Only very few have been realized for performance. Each opportunity I have played them with friends was really jewelry memory for me. One of them was playing the famous d minor piano concerto of Mozart, KV466, rearranged for quartet and a flute by Czerny, with a good friend of mine since the med school days and the other company. It was in Shinshyu more than 10 years ago. Her cadenza performance for this piece was really demonish, which astonished us all.

I must say, however, the others, mayb 80 or 90% of all the scores, have not been realized at all. I have got each of them hoping I would play it in the future. But most of those dreams won't come true because of lack of my technique or of company to play with. It is not only the dreams in performance of cello but in the other areas of life which would remain unrealized throughout our life. Our life may be a chain of such events which has not come true. We have dreamed and yearned for those things a lot. They would left not done, though.

I find it more important for us to do what and how we try to realize them. The results are only results. The process of efforts is more precious and important. With such a view, I would go on practising some of the scores unrealized yet even if it won't come true. It is the life.

And I should also look for someone who takes over these scores in the near future. Hopefully, they would give someone more dreams of performing them.