It will be our 39th anniversary tomorrow. Such anniversary could have never been our own affairs for us. It has come, however. Time is surely flowing fast.

Starting our residency at a med school hospital, we were not involved in the sweet life of honey moon. All concern was at the training as med doctors in pediatrics for me as well as in psychiatry for my wife. No car nor TV set at the dorm those days.  No ham radio in the first year at least. The life was full with new experiences and ambition for the future.

Now we are at the last chapter of life. I am thankful to my wife for her dedication and endurance. It is my turn to make her happier from now, even though it might be a bit too late. Never too late. Believe there are good things ready for us in this chapter.

Sorry for the same photo as I posted here in the past but this one is my favorite one taken in the honey moon. She was, no, is beautiful. 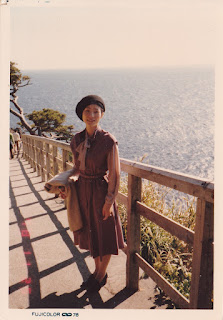 It could be taken a cheating. Here is more recent one taken during the trip to Shinshyu 7 years ago. 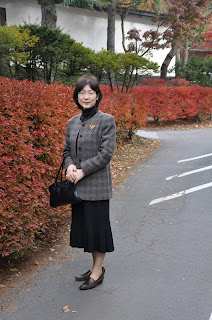 Happy holiday seasons to all of you, my friends.

The words a professor has left

Seven years ago, professor of Tokyo University, Yohji Totsuka, has died from colon cancer. He was a disciple of Masatoshi Koshiba, professor emeritus of the same University, a Nobel Prize awardee for quantum physics, and had been making research work regarding elementary particle after his elmer. I bet he was in his fifties then. Of course, I had no acquaintance with him but have known him only through his blog as told below.

In the process to death, he had kept a blog for months. He has written something profound in plain words in it. Once, he was asked by a person with the same illness of poor prognosis how he/she could live positively despite of the fatal illness. Professor Totsuka has answered that person to start writing/reading/listening more carefully as well as deliberately. With that effort, he/she could overcome the fear for death. He has told this in most tender manner to that person. Most affectionate way. I knew that was what he had actually been doing at that time. He also introduced words of Shiki Masaoka, one of the renowned haiku poets in japanese traditional style, who fought against tuberculosis and died in his young age. It was "To be enlightened in life is not to die well but to live well." I was most impressed how he has answered, in kind and open minded way, to the other who suffered from the same fatal illness. Very few could do such a thing in his situation. What he said sounded right and appropriate as an answer to the inquirer. It is, moreover, suggestive to us how to live and die.

It is not so soon when I should consider of dying by myself. But no one knows when it comes to us. At my age, I feel I should get ready for that. Totsuka might mean we should live well in order to die well. I feel it couldn't be too early for us to prepare for that moment.
Posted by Shin JA1NUT at 7:59 PM 3 comments:

A military conflict in this area is risky

There is a path that the US high officials enter our country without immigration check. Land on Yokota base then fly to Akasaka Press Center on a helicopter. Our governmental office has no idea how many visitors from the US are in our country.

The large mastery of the air from Kanto to Chubu area, named Yokota air space is controlled by the US. Our civil aircrafts could not access to that area.

These facts are the proof that our counry is not independent yet. President Trump has landed on Yokota but not Haneda or Narita. He has made the first address for the military personel at Yokota base in his visit to our country. Could there be any explanation other than his intention to assert that Japan is a dependency of the US?

President Trump has claimed that our government should have shot the missiles earlier this year. The missiles flied too high to be shot with the missile defence system. If he really knew of that limitation of missile defence system, he must have insisted that Japan should be a military shield against attack by NK toward the US. He also mentioned that Japan was a warrior country but not a country of peace.

He won't care for the victims, refugees and the devastating damage by any conflict between the US and NK in this area. It is estimated at least one million people would be killed in such a conflict. If our nuclear power plants are targetted for attack by NK, our country won't survive any longer. Of course, our bellicose PM Abe should be blamed for his policy of brinksmanship. Yet, hopefully, the US people and the other peoples should know how risky it is to attempt to give rise to military conflict in this area.
Posted by Shin JA1NUT at 5:17 PM No comments:

A step to police state

A japanese journalist, Shiori Itoh, was raped by a person, Takayuki Yamaguchi, who had been in close relationship with the Abe administration members. Yamaguchi used to be also a journalist and to have written a couple of books regarding the prime minister Abe. They were just intended to flatter Abe.

With approval for arresting Yamaguchi by the court after appropriate procedure, he was being arrested by the regional police in charge of the case, when the chief of criminal investigation in police ordered them to stop it. This chief used to be a secretary of the chief cabinet secretary in the Abe administration. The following site depicts what has happened in this case;here.

Itoh, the victim of the case, has made formal complaints about this cancellation of this arrest to the prosecution committee. But the decision by the chief of criminal investigation was not denied. This chief has been promoted in the police after hushing up this scandal.

Now a number of elites in the police are involved in the cabinet as a step for promotion. They won't go to the field work in police but get close relationship with the pliticians in the ruling party through work at the cabinet. The chief of the cabinet information research is one example, who has worked in the police for a long time and is told to be also involved in this scandal case. With close relationship with the police through these elites, the administration is gathering informations of scandal the politicians of the opposite parties or the bureaucrats resisting to the administration.

Police state is a condition for totalitarianism. I am afraid our country is lead to it.
Posted by Shin JA1NUT at 8:35 AM No comments: