An ensemble with good friends of mine

How fast the happy days are gone! A facebook popup told, on the same day 6 years ago, I had played the piano trio of Faure at a small concert. Of course, with the same two girls. Both of them have been married since then. The violinist would become a happy mother of two children very soon.

When I was doing stably with my own practice, I recalled playing cello for spare time. I was about 50 years old, 18 years ago, then. At first, I wanted my daughter to play with me, who said no way to me for her studies for the entrance exam etc and possibly due to the rebellious phase in her life. This girl who used to learn violin from the same teacher as my daughter did is a professional violinist. She has had training and study in Germany after graduation of a music university some years ago. She has kindly done with me for over 10 years for ensemble. A kind and great violinist. 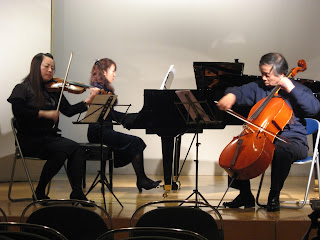 I miss those days but still feel much grateful to them for letting me play with them. Feeling I am getting worse at performing cello for something of fast passage etc in accordance with aging, I am still practising it everyday. So far, no chance for me to play such a chamber music. I am still dreaming of another chance to play with them.
Posted by Shin JA1NUT at 8:23 AM No comments:

The 7th anniversary of my mother's passing

In 3 days, it will be the 7th anniversary of my mother's passing. She was 96 years old. Despite of having lived in Christianity belief, she has suffered from many things in her life. In the end years of her life, she had Alzheimer's disease. Losing her recent memory, she still kept her respectable personality.

When we decided not to care for her at home but to move her to a nursing facility nearby, my borther wanted to be with her at his home in Sendai. In a year or so, it turned out to be difficult for him and his wife to go on caring for her. She had been sent in a nursing facility there, where she had had one of the best care available for her. I could not thank more the staff there and my brother/his wife.

She used to be a sharp person. I sometimes wonder what frustration and anxiety for her to lose her recent memory and some aspects of her intellectuality. She has accepted it as it was without complaining anything to the others. Her wish was to come back here and to live with our father, who had passed away 14 years ago.

Even after she has lost her recent memory, when I brought breakfast to her at the house in the same property, I found her praying eagerly sitting at the table. Even though I was not a Christian, it was an unforgettable scene of glory even for me. In her last hospitalization, she was always smiling to the visitors asking about the related people.  Even though she repeatedly expressed her wish to come home here.

On the 1st anniversary, my sister has sent me a poem titled as A Prayer for the Autumn Years of Life, by Heuvers, who had spent many years as a catholic priest in Japan. What is written in this poem was how she has spent her last years of life. I believe she has taught us how to spend the last years of our lives with her existence itself.

I still miss her.

This is an excellent performance of this piece. Very accurate in ensemble and full of songs in performance. Each performer is really artistic with amazing capability.
It is surprising that an instant ensemble like this group could perform in this way.

The 1st movement is expressing tragedy in adolescence. Urgence and energy is in the 2nd movement. Delicate song of love is the 3rd movement. I would emphasize the 4th movement showing how unique music of Brahms is as in the case of his Nr4 symphony. Struggle in lonesomeness and meaninglessness of life is expressed in this movement in my view. This music may express every aspect of life from young days to elderly.

I used to play the last movement in med school days. A lecture room equipped with an old upright piano. It was sometime in fall. The setting sun was shining through the window facing to the west. Quiet except for our performance. We have played the last movement, even though we have never known what it had meant in our lives yet. The friends of mine, playing this piece with me, might have lived their lives and must be standing at the almost last chapter of their lives now. For now, they might understand first or even deeper what the music has meant.

Potatoes and apples are budding

Potatoes are finally budding. I was almost uttering some words when I found this coming out in the soil. 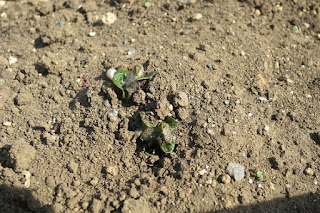 We have planted a couple of apple trees in the garden 3 or 4 years ago. They have bloomed for the first time this year. We have looked forward to their flowers. They may bear first fruits very soon. 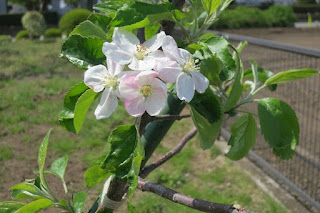 It was in my forties when I was first moved by plants growing or betting born. Lives are miraculous even if we know of that process as a knowledge. Older we get, more pleasure we have seeing them vivid and alive.

I am going to plant various kinds of vegetables. It is for the harvests themselves and for the pleasure to watch lives growing.

We will have the 7th anniversary of my mother's passing very soon. My brother and his wife will visit and have some time together with us here. Time is still flying away so fast. I would treasure every moment with family members together.
Posted by Shin JA1NUT at 7:36 PM 2 comments: