The outbreak of COVID19 has simplified my way of life even more. Gardening, farming, playing cello, cooking, doing house chores and sometimes playing with radio. No outing other than shopping foods at a super market once every 2 days. No complaints so far except for a bit of worries for the future.

Expecting a drastic collapse of economy, I decided to grow more of potatoes and the other vegetables for ourselves this year. I wonder why people are not concerned about the economic hardship inevitable in the near future.

Potatoes are budding right now. Such young plants look so lovely to me. 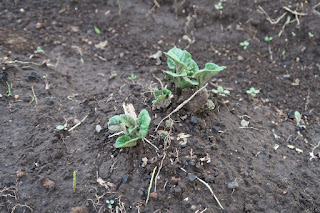 Azalea along the entrance is coming out now. 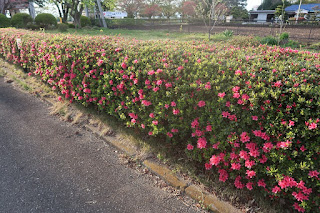 The other kind of azalea, enkianthus, has born fresh leaves. Some of them are starting blooming. 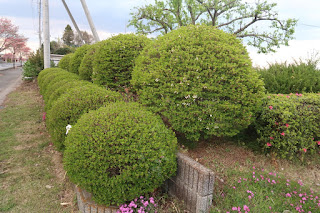 Caring for those plants, I often recall of my father, who used to visit this place from Tokyo on a small truck every week end. It was around his sixtieth of age before retirement. He has cultivated this place and has built a tiny cottage by himself. He has started his life along in his retirement. My mother used to follow him in a few years. And in another few years, disgusted at the small and dirty resident dorm at the med school hospital, we have built our own house in the same property. It is the foundation of our family at this place over 30 years ago. I wonder how my parents want to spend their retirement here. My family owed them a lot for raising kids etc. Have I done enough for parents while they were alive? 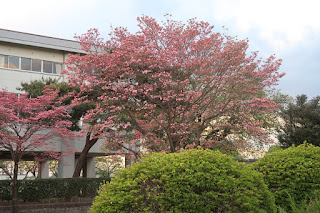 Dogwood trees are also blooming on the roadside. The junior high next to our property across the street is perfectly quiet even though it could be noisy with the students shouting, yelling and laughing without the outbreak. Yes, it is off now. 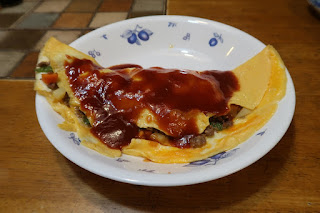 This evening, this omlet was the main dish for dinner. The sauce is special featured white wine and butter.

May this peaceful day be continued!

The principal of Keio University hospital, one of the most famous hospital in Tokyo,  has published about their strategy to deal with the COVID19 outbreak. In fact, they have had nosocomial infections among the staff and the patients. In the end of their statement, they have given the prevalence rate of COVID19 among the patients who visited the hospital for medical examination/care for the other diseases/symptoms than COVID19 and have been undergone PCR test. It was surprisingly high, that is, 5.9%. This prevalence rate may not be identical to that among "healthy" people but still roughly approximates the latter.

There have been a few reports which show the result of antibody testing among healthy groups. Most of them took data from large number of people. They vary from 2 to 15%. Some researchers criticize these data owing to the possible cross reactivity with the other common Corona virus. The antibody measurement system should be developed to be specific for the Sars Cov2. And I believe the data of 5 to 15% could be reliable so far. This means quite some portion of the people has experienced the infection in the past. It is another question if the antibody examinees have had could be protective to further infection of COVID19 or not.

In Tokyo, the outbreak is still going on with increasing number of those with test positive and of the victims due to COVID19. Both of them, increasing daily, are still fewer than those in Europe or the USA. But the low numbers should be due to limited testing. The infected people in Tokyo could be as many as several hundred thousands. Since the outbreak is still on the uphill phase, there could be a few hundred thousand severe cases and a ten thousand or two of fatal cases in Tokyo in the near future. This could be only the worst scenario.

Recently, Singapore, which was regarded an honor country in the battle against COVID19 virus in the beginning, has caused a bad mega cluster among the foreign workers. The foreign workers have been living in dormitories with high density of population and have not given the chance for the PCR test even if they have had symptoms suggestive of COVID19, as Bloomberg reported. This news reminded me of the people in Tokyo who were still commuting on crowded trains even if not like the usual canned sardines fashion. The authority won't question about the jam packed commuter trains which could cause clusters.

On the other hand, some doctors are optimistic for the characteristics of this infection and its course from now. The number of infected people in Tokyo according to the date of beginning of symptoms is graphed as below.

They insist the infection has peaked out in the beginning of this month. If this is true, it could never be better. The problem is that it depends on the number of PCR test done by the administration. As well known, the number of the test has been strictly limited by them. I have heard some cases were denied to be tested by the authority even if the doctor on charge thought it quite necessary. And the administration has looked upon those closely contacted or those returning from foreign countries as the candidate for testing. These limitation of testing could cause certain bias for the result. I am free from judging this peak out theory so far.

The health care system is under jeopardy due to nosocomial infections and increased need for inpatients of COVID19. It is too sad the authority has not taken the larger scale of data from more people, which could have given us more reliable prospect for the future. The authority seems to finally change its attitude for more detailed and accurate epidemiological data. Without reliable data, we could not foresee the future nor decide what maneuver we should take.

The NY state government and the people in the state have accomplished reduction of the number of new inpatient. Even though it is only a milestone for complete conquer against the novel Corona virus, I would say congratulations to the people in NY. I believe, whatever political stance you may take, the governor Cuomo has been doing a great job.

I am also impressed at the speech made by PM Johnson who has just discharged the hospital. He has stressed his gratitude toward two nurses, both of them being immigrants. Johnson used to be for expulsion of immigrants. He also thanked to the staff of NHS. I know he and his party have cut the budget for health care. Something may be changing with him.

I am hopeful for the reformation of the society everywhere in the world while experiencing this disaster to humankind. If it comes true, this disaster could turn to be a blessing for us.

On the novel Corona virus and my niece

I have been busy following up the outbreak of COVID19 and the research work of its infection mechanism and of related possibilities for treatment. It seems overshooting has started in such big cities as Tokyo. The administration has not increased as many test cases as required yet. The number of infected cases published by the government is not reliable. It is underestimated. Some researchers in mathematical epidemiology has proposed to reduce the contact rate among people to 80% of the usual setting to the government. But the politicians were concerned only about its depressing effects on economy and has modified it to 70% by themselves. Outing is not legally forbidden yet. Most importantly, the government won't compensate the economic loss due to closing down of businesses, which may result in less effective restriction of businesses. These are the reasons why the overshooting is starting. We won't be able to escape from the overshooting even if we are in a countryside 50 miles north of Tokyo. The collapse of healthcare system due to overshooting is of primary concern at present.

I am thrilled to look over some research papers on the virus, especially with its phylogeny, the mechanism how it binds to the cell wall receptor and invade into the cell. The pathophysiology of ARDS is precisely understood as a mechanism of cytokine storms and cytokine release syndrome. Different reagents are being tried to inhibit each process. The progress of such researches sure overwhelms me. Hopefully, some of them will turn effective in clinical settings. I find myself excited to see what is going on in this field. The unfavorable aspect of such research results is that the virus could mutate frequently so that it may escape from effect of possible vaccine. They say it will take 1.5 years to obtain effective vaccine.

Several days ago, I have received an e mail from my niece. It is the girl whom I have played the piano trio last September together with a violinist friend. I have described about it in this blog then.

We were planning performing another piano trio at a concert this fall. We would have started practice in March or April. But, due to this novel Corona virus outbreak, we had to cancel both. In the e mail, niece has told us we should postpone practice planned in May. She, working as a head nurse at a ward of National Cancer Center in Tokyo, has quarantined herself at home since she had close contacts with a couple of colleague nurses infected with the virus at the hospital about 2 weeks ago. The PCR test has turned out negative for her. And she is returning to the work tomorrow.

Surprisingly, her ward would accomodate those patients with COVID19 according to the Tokyo Metropolitan Government's request. The government should have prepared much more beds for the patients with this disease. At least during Feb. and Mar. since the outbreak began and burned up. The government had wanted to hold the Olympic games this summer until IOC decided to postpone it in the end of Mar. They have not prepared for this situation going on now. That is why National Cancer Center, which is least equipped with such infectious disease patients, should accept the patients of COVID19 now.

I am sure she should work in the environment where she and her colleague staff are threatened for infection all the time from now without such facility/equipment as negative pressure chamber. I wonder if sufficient number of PPE is provided for the staff. Infection control is a highly specific field in health care. I wonder if they could practice it without any previous training.

It may become like field hospital, I am afraid. It might be an unprecedented experience for her not only as a nurse but also as a human. She has not expressed any emotional reaction to this drastic change in her job. I suppose she might worry about herself and her family as well. As her mother, my elder sister, used to say, however, she has been a kind of lady invulnerable to fear in her life. I guess as well as hope that she would do well with her new responsibility.

Workers of healthcare are always required to be ready for such an occasion. I have experienced the scary situation when SARS cases occurred in our country in 2003. At my small private practice not equipped with protective gear etc, I felt nervous seeing my patients. The administration has not given any support such as providing N95 masks or protective gawn etc. Without support, economical and of logistics, it was hard for us to do with it. I am afraid my niece should work with insecure feeling. I sincerely wish she will get it through and may grow as a nurse when the outbreak is settled down. It is her calling she has chosen after her grandmother, that is my mother, and her mother.
Posted by Shin JA1NUT at 12:52 AM No comments: