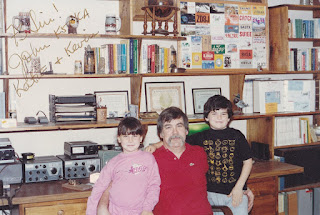 That is all what we have talked on the radio this morning. But isn't it fascinating that we live together for half a century far away and know each other only through radio?
Posted by Shin JA1NUT at 9:27 AM 4 comments:

When I was in the 2nd grade of a elementary school, I got fracture on a leg while playing in a woods with friends. With that leg casted rigidly, I could not go for school for a few weeks. I have spent all day alone at home. It was a small and simple home which our parents had built in a suburb of Tokyo after an exodus from the countryside, that is, this place we are living right now.

Late in the afternoon, I was listening to radio at a small room exposed to the afternoon sun. There was a program which always aired the same music. Later, I knew it was a famous tune from the Slavic Dance OP46 by Dvorak. It is a kind of sentimental but still beautiful melody. It might be in '50s or '60s when Szell conducting Cleveland S.O. recorded this piece. It was the time when I used to listen to it everyday waiting for the family members to come home.

This piece will be the encore at a concert of Fukushima University I am going to play with. It would be a memorable concert for me.
Posted by Shin JA1NUT at 12:27 PM 2 comments:

A drive to southern Fukushima

Several days ago, when it became very fine after it had been wet for several weeks, I decided to go for a driving tour. At first, I thought to go to the coast area. However, while driving to the coast on a high way, an idea to drive on a route where I used to take my family and mother for driving came up in mind. It was a place I would revisit by any means. Due to its beautiful scenary and the fond memory of that drive with family. It ran from Iwaki to Kooriyama in the southern part of Fukushima prefecture in Abukuma mountains. It might be, however, difficult for those in the overseas to understand what an area it was. Abukuma mountains have ranges of low mountains covering the south eastern corner of Tohoku district. It is about 170km from the north to the south facing to the Pacific Ocean. A few trunk roads run across the area. But only a rail road from south to north. Not much plain area for farming, either. And the old style of lives and towns are still left in the area.

The route I was aiming at was still as it used to be. On a narrow valley, it ran from east to west. It was surrounded with low mountains on the both sides. Of course, since we drove back in '90s, there were some changes there. Most conspicuous thing was the high way almost along this route. Basically, it was still a countryside road with a few houses along it and occasionaly running through old fashioned towns. I forgot taking pictures in this drive, though. Possibly, I indulged myself too much in recalling the drive with family in the past. For substitute, a photo is quoted from Wikipedia here;

The woods have not changed their colors yet. It may take a month or two to have the leaves turn yellow and red. Looking at the beautiful woods, I remembered of a news that told me the soil under the dams around this area had been contaminated with radio active substances due to the nuclear power plant explosion. It reached up to tens thousand of Bq as the news said. They have have been deconaminating the area. It has been done only in the residential area. No way to do with contamination in mountains. The radio active substances are being precipitated in the soil and would go on staying there for decades or even hundreds of years. They would be attenuated only in geometric series fashion. They won't disappear completely forever. The politicians seem to ignore this pollution by themselves which would be delivered to the next generation. Makins excuses, they are restarting the other nuclear power plants. What a shame! I feel not only angry but also sad to recognize this situation.

I still loved the scenes over there. It brings me back to the recent memory of the last drive with family and to something essential to our lives from the old age. On the way back home, I have purchased some apples at a store, which were cropped recently. They said the apples had had some minor scratches on the surface, so that they won't be unsuited for the market. They tasted great, though. Very fragrant and sweet. I liked what they had honestly explained on their products.

It was a solitary drive by myself. Finally, I got soreness on knees while driving. It was still worth going for that area in the very beautiful weather.

The practice of the orchestra at Fukushima university will start in a few weeks. I am looking forward to playing with young students there.
Posted by Shin JA1NUT at 5:33 PM No comments:

On a beautiful fall day

It became fine and crisp today after it had been very wet for the past several weeks. 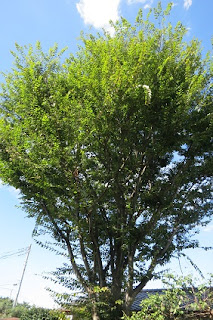 Cosmos is in full blossom. 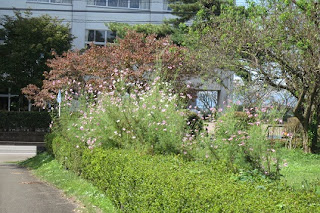 While washing clothes and sheets and sunbathing mattresses, I have ventilated the house parents used to live. 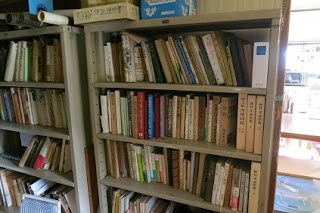 My father used to be a eager reader of books. There are much more books in the storage house here. I find i am reading the same kind of books regarding the modern history of our country, the problem of responsibility of the WWII and so forth. I could not help chuckling at myself knowing that I have got the same interests. It might be a much more serious problem for him since he had been compelled to spend his youth for the war. 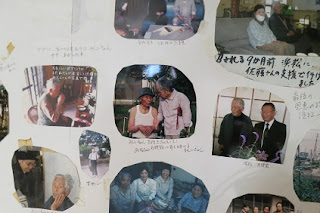 There are a lot of pictures displayed on the wall. My sister used to show them for our old mother suffered from Alzheimer in her last years. Our father passed away in 2004 while mother used to outlive him for 7 years. She has lived in this home alone until 2009 when my brother took her to his home and then to a nursing home in Sendai. A lot of pictures with fond memories. I am cleaning and ventilating the house even though they won't return here of course.

In a BBS, a certain person asked how we got along with grief losing family members in close relationship. I would have replied to him he should converse with his family members in mind. I don't know if we could see them in person someday. But they are surely living in our mind. Hoping for the day we meet again, even if we are not sure if it comes true or not, we should talk to those we have lost. It will help us to relieve our grief and possibly to maintain our hope to meet them again.

I am convinced again today I should thank for being alive in this way.