Recently, some kinds of essential fatty acids are often getting into the news, whether in academism or in mass media. Excessive intake of omega 6 variety is thought to cause chronic inflammation and arteriosclerosis while omega 3 counteracts it. In nutritional science, the ratio of omega 6 to 3 is always questioned. Modern menus of meal is apt to get it higher than ideal value.

Generally speaking, omega 6 is abundant in beef, especially, those fed with artificial feed made from corn etc while omega 3 is dominant in beef grass fed. The same findings apply to fish. Artificially grown fish is told to contain more omega 6.

I am sorry to say that American or Aussie beef contains much estrogen as growth promoter in addition to this fatty acid issue.

Since I knew of this info on nutrition, I have been trying to avoid omega 6 abundant items and to augment taking omega 3 rich foods. Another aspect of my personality says it won't matter with us at our age for now. But it is not meaningless to be aware of those food items promoting aging and aging related illnesses.

Here is such a menu. Cod fish as meuniere. This cod is naturally grown one. 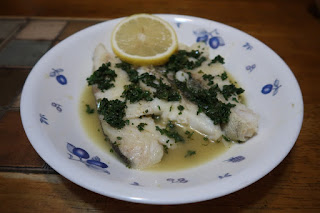 It is a headache how to avoid imported beef in the menu. Japanese beef is too expensive. I wonder if chicken imported from Thailand is OK for this issue. Worry is not exhausted.

Unintentionally looking up a ume tree in the garden, I found a few floweres had come out. So early in this winter. 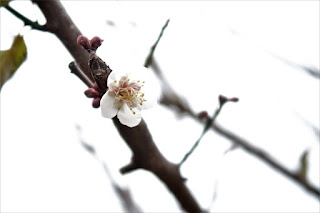 This tree is located at the most advantageous place for plants in the garden, where they get sunshine all day long. The other ume trees are not blooming yet.

It was the coldest day according to our traditional calendar a couple of days ago. It rarely goes over 10 degrees C in the daytime. But it won't go below -5 degrees early in the morning, that has been the usual temperature in this area at that time. It often went down to -10 degrees C at that time in the past.

I am afraid it could be a phenomenon of the global warming. When I mention of this global issue in such as Facebook, a lot of people argue against me. If we investigate the transition of the average temperature or of the CO2 concentration in the air etc, we easily reach the conclusion that the global warming is an imminent issue in the world.

Finding these flowers coming out, I could not help feeling complicated. A pleasure to have earliest sign of spring arrival while it could be a sign of the global warming.

Bjorn Andresen, a film star, made world debut with the famous movie, Death in Venice, in 1971. It was a story of an old artist fascinated by a beautiful boy Bjorn played in the movie. The artist was destined to die. The music featured the Adagietto from the 5th symphony by Mahler was pretty impressive.

I was not very concerned about this movie at the time it was started to run in theaters. It was when I started study at a med school and was occupied with music in the orchestra starting career as a cellist.

However, this boy played by Bjorn Andresen was unforgettable for his beauty for sure even if we were not interested in the story itself. He was the aestheticism of this story himself.

The clip quoted above shows how Bjorn Andresen has lived until now. He was originally a music student. While he was in the film business for several years, he did not like to be remembered as the role in this film. He seems to have quit that business and now is living as a piano teacher with his family. In the clip, when he was asked by the director at the interview of recruitment of players to take off the sweater, he didn't do that while smiling at him. It might mean he has already owned himself and won't do what he would not. That may be why he has quit this apparently showy business but started his own way in music.

I believe Mahler has pursued relief from death throughout his life. It is well understood by his biography by Bruno Walter or his desire to avoid composing the 10th symphony, which has been the last number of symphonies by the other precedent composers in their lives. With the beauty in his music, he seemed to try to get away from the anxiety of death. The theme of the movie, Death in Venice, seems to be a product to compensate absurdity of death with beautiful being. Has it been successful?

Bjorn Andresen, such a beauty in his youth, got old and lost his beauty. Such beauty even in the virtual world of novel or film won't last eternally. Everyone gets old and is not immortal. His way of life seems to tell us that. I was a bit relieved to know of this fact.

The clip says Bjorn owes much to Chopin. Beauty in abstract music. He says he has been making dialogue with Chopin. In the first scene of the clip, there is his saying as follows;

"The rare moment of happiness that I have known, I owe them to the piano. I still have long conversations with Chopin.

Another tiny shrine in the farms

I have left this blog for a while. Things are going on uneventfully here. We are getting into the mid winder season for now. Sun is getting a bit brighter and shining for longer time for now, though.

I am taking a walk every several days. I know I should do that oftener. This chilly weather tends to keep me indoor. It is not very good for physical as well as mental health, as you know. I am trying to walk a bit more.

I found another walk path south of here, where they had not developed much. A lot of farms and forests there. It is a scenery in this area a few decades ago.

On the way of walking, there is a bush and trees along the road. I guess it is an abandoned property. It is impossible for me to go into there and to know what there has been. I still suspect it was a place some family had lived for a long time and the people had gone somewhere or had died. Not sure. But it is definitely a certain prospect there will be more houses and properties abandoned in the very near future. Unfortunately, demographics tells that and there is no measures taken by the government. 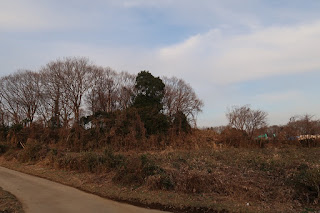 This is the road I walk. Surrounded by farms and forests. A few houses ahead and on the right side on this photo. It is too narrow for a car or even a person to go through. You may see a small forest on the left side on this photo. Whenever walking through beside it, I always wondered what it was. Maybe, a small shrine? 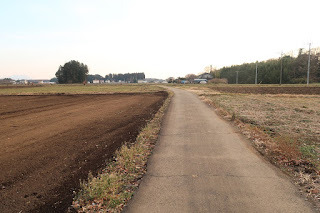 I have guessed right. There was a small shrine building among the cedar trees. A lot of weeds and bushes. It seemed this tiny shrine had not been well cared for. 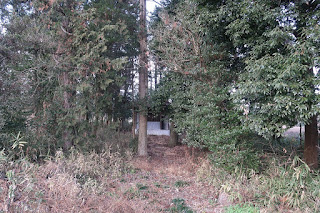 A small signboard told this shrine was derived from the ruler in this area in the 12th century. The person named Nakamura, the same as the present place name, who had contributed much to the Samurai Yoritomo Minamoto in the conquer war in Tohoku area was assigned to the regional lord in Sendai in Tohoku area. In the memory of this event, Nakamura has ordered to build this shrine. 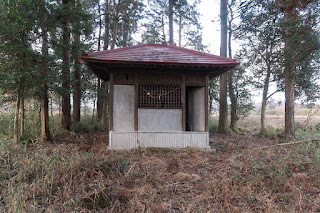 Of course, this shrine building is too new for that explanation. Even if it was a fact the regional ruler ordered to build one or a series of shrines, this must not be such shrine itself. But those having built this building in the later years would authorize it from such a historical event.

In that tiny building, cleaned up tidy, there was a small altar. A sake bottle and a cup were offered before that. It may mean this shrine was not totally forgotten. 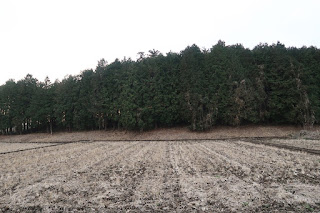 On the way back home, I found a pretty big hill covered with cedar trees. I guess it is a kind of ancient tomb. I didn't dare to adventure to look up there since there was no path to the structure if it was really something ancient. Maybe, when I put on a shoes I could go through this muddy farm.

Previously, I have uploaded an article in this blog regarding a pretty big shrine in this area. It was also told it came from the era of Nakamura in the 12th century. There must be the other ones in this area. I could not help feeling amazed at the ancient people who worshiped and maintained those shrines. I believe they were kind of anchorage for them. Even though the present Shinto shrines should be discarded because of the recent history they have lead this country to the cruel war, I believe these unfamous shrines should be delivered to the next generation as an important cultural heritage.

What Ghosn case tells us

It was a real surprising news Carlos Ghosn had escaped to Lebanon at the very last moment of the last year in this way.

Some people say he should get trial even if he had complaints about that. He was living in our country under our justice system, as they say.

I doubt it from a few reasons.

One is that what he has been accused is a kind of matter within a corporate. It should have been questioned at the board of directors or, at least, at a meeting of shareholders. It smelled like an internal struggle in Nissan Co. Ghosn has received much more salary than the other corporate tops ever in Japan. They say the prosecutors have focused on that from our traditional common sense among people. But the economic disparity is another issue which should be discussed apart from filing case to the court.

The other point is the hostage justice in our justice system exactly described in this paper mentioned above. Prosecutors carry on detention of a criminal suspect until he/she confesses about it. This has caused a lot of false charge by prosecution in the past. From the standpoint of basic human rights, this system should be abandoned.

Apart from this Ghosn case, the prosecution system should be reformed as soon as possible.
Posted by Shin JA1NUT at 1:07 PM No comments: