We have harvested sweet persimmons from a couple of trees. They are good for a material of fresh salad.

There is a sour persimmon tree at a corner of the garden. My mother used to make dried persimmon from them. Even after she had suffered from Alzheimer, she did not stopped doing that in this season. It might be what her mother did in her young days. Mother might have learned from her or have learned it watching her mother. Anyway, it is my turn to make dried persimmons. I have reaped some 70 or 80 of them and peeled the skin. Two or three of them were hooked on a string in series and were dipped in boiled water to be sterilized for a few seconds. They have been hung under the overhang in this way. 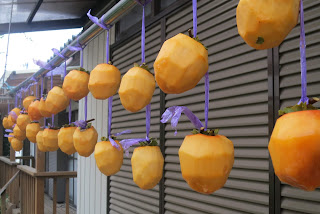 They say it takes a couple of weeks for them to be completely dried. I found, however, some of them were already ripened there today. Only 4 or 5 days. It may be thanks to the dry and cool weather for the days. Needless to say I have tried one of them. Sweet. Elegant. Tasty. I knew why my mother used to do the same thing years ago. 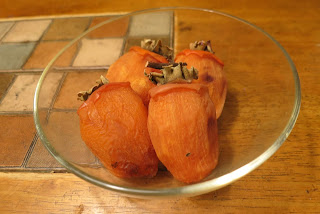 I know it was a kind of wisedome in life she had learned from her mother. That knowledge, if it is only a trivial thing, is now being delivered to me. It sure is a link of life from ancestors to me.

This blog seems like a food blog now. I still do the other things than cooking or making such as this dried fruit. What is going on in the world is enough to make me feel terrified. But living quietly in this way is also valuable to me. Believe me I am not only a chef/farmer yet. My inner world is so vivid and is concerned about things in the world.

Governmental manipulation in the stock market is being over

I am not an active investor to the stock at all. But I am still interested in it. The stock market reflects, or strictly speaking, used to reflect the economy in our country as well as the world.

Since the administration of Abe started 6 years ago, in addition to asset bubble due to astronomical scale of monetary easing, the government has manupilated the stock market through buying massive amount of ETF by BOJ. It is to make window dressing on the economy in our country. BOJ has become the major stock holder of 40% of the companies in the market. It could never be continued. With the world stock market getting into bear phase, our government/BOJ could never go on this window dressing.

Since Oct. 2nd, the stock price is dropping rapidly. About 10% drop in total. During this short period, BOJ has bought ETF by 36 million USD, which has been absorbed by foreign vulture funds through short selling. Of course, the stock market could wax and wane. It is the characteristics of the stock market. But it could not be excused anyway to try to keep the governmental manipulation in the market with the fund with the fund from BOJ. We should bear the consequence in the near future.

It is a tragedy that most people are not aware of that in the vague euphoria in the society from the asset bubble. That is what the Abe administration aim at.
Posted by Shin JA1NUT at 11:22 AM No comments:

Almost last batch of tomato harvest in the garden farm. 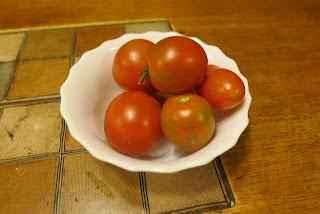 I love those tomatoes grown in the garden farm. Quite different from those sold in  supermarkets. Sweet and crisp. I often express that, when talking to my wife, the cell membrane is intact! I sure miss them now. It will get below 10 degrees C early in the morning here in a few days. They won't get ripe soon. Expecting another good harvest next summer, I will get ready for good farm for tomatoes. 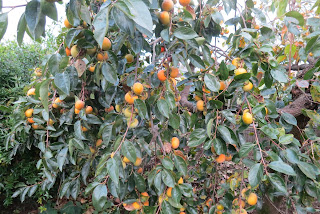 Persimmons are ripened as well. They are sliced and added to fresh salad every day. Unfortunately,almost all of them ripe at the same time. Some of them will be gifts to crows in thie area. It's their share. 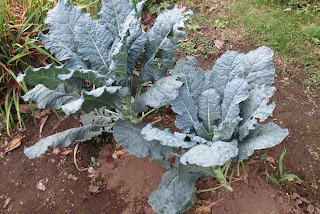 Broccoli are grwoing even though some leaves have been biten by bugs. Later this fall, they may provide us fresh fruits also served for salad after being boiled.

What a blessing we could have such a rich and peaceful fall. May it last long for us and for all my friends.

The article posted below has reminded me of "Autumn Leaves" sung by Yves Montand. It was in '60s when I got a record of that song. Having built an audio amplifier featuring a couple of 6BM8s, I listened to variety of musics. Different genres including chanson like this "Autumn Leaves". I was only a teenage boy attending a Jr. High in Tokyo and had never learned French. Without knowing what the song meant, I used to sing the song mimicing his French. I was surprised to see what it meant with this clip. How could a teenage boy sympathize with such a song of bitterness in life? Did it foresee my life?

Starting a story as if talking to his friends. Withoug making audience be aware of the transition, he moves spontaneously to the song of beautiful melody. What melancholy and nostalgia for the passed days are covering the entire song! It is a song tha a man remembers of the past with a girl friend who has been separated long time ago. It is comparable to remebering of own life. We fall in love with our own lives but it is going away soon.

I was so glad to see Montand in this clip again. In my teenage days, when I listened to this song at first, I have never thought of listening it again at this age feeling deeply nostalgic for those days.
Posted by Shin JA1NUT at 1:23 PM No comments:

A Korean travellor bassist is making an instant session with the musicians on a street in Florence Italy. Of course, they played in impromptu. Excellent performance. In addition to their performance, this clip says we could be company through music. Music has the power to unite us.

Autumn leaves sure sound great in this season.

The election result of Okinawa governor

The election result of Okinawa governor will be a real clout to the Abe administration. Even though the government has orgnized a stark campaign for their candidate, some of them almost illegal, the liberal one has defeated the former by a big difference. The main issue was if they would allow the government to build a new military base at Henoko, a beautiful beach with a lot of animals/fish/coral. The new base is estimated to be a permanet facility. The US base lots occupy about 20% of the island, that is, 70% of total US military base in Japan in 0.6% of the land area of our country. It has been a pain for them to have such burden since the end of WWII. Our government will face to a difficulty how to do with construction of the new base at Henoko. Without approval for the plan by Okinawans, it won't be possible for anyone to construct any base any longer.

Okinawan US base is mostly of Marines, which should not be involved in the conflict of invasion to Okinawa itself. Marines should go to Sasebo at first to deploy the vessels in order to execute the operation. No reason to have such troops of Marines stationed in Okinawa. The Japan US Status of Forces Agreement is disadvantageous especially to the Japanese in Okinawa. The US military enjoys a  kind of extraterritoriality in Okinawa. It should have been corrected by our government. However, the politicians/high officials would never do that. It is believed there is a kind of hierarchy in our country of which the US military/government occupies the top.

The following article on the result of this election is excellent except for a couple of points. Firstly, Okinawa has not received any subsidy more than the other prefectures. The Okinawan government estimates the economy of Okinawa is not dependent on the income from the military base but it is an obstacle for them to develop Okinawa properly. Secondly, the new governor is still a mixed race between Japan and the US. But the race is not the matter. He is still what he has been and what he will have been.

It may not be a problem of foreign people, especially of the US people. But if the problem of the US military bases continues in Okinawa, it could be a big thorn for both countries in the near future, I am afraid.
Posted by Shin JA1NUT at 10:01 PM No comments: