Ellen W1YL has passed away

Early yesterday morning, I knew Ellen W1YL had gone silent key the day before by a post of her relative in Facebook. It was expected but still was a sad news in fact. She has been undergone downhill for her health issue for the past weeks, I knew. Ned W1RAN, her old friend, has let me know how she has been doing from time to time.

It was in late '80s when I got a personal acquaintance with her. She often got on 40m CW late at night in our time. But it seemed Bob, her OM, used to take the seat oftener than her. With the ideal set up with a beam there, their signals were always booming in here.

It was the time when I joined FOC and had become a crazy DX chaser. After a DX pedition to XU as XU0JA, I was asked to write an article for a DX club by her when she was the editor of the club magazine. In early millenium years, she has lost her beloving son Jamie K4OJ and, in a couple of years, Bob. What losses they were for her! But she never told me the words of lingering attachment to them but was always proud of the days when she enjoyed the same hobby together with them. She moved to an apartment in a few years, I believe, where she had to give up oprating radio.

It was 2016 when she appeared before me all of sudden. With generosity of Tom K5RC and much help from her friends, she could start operating the big station of W7RN through remote control. This is the post in this blog which I made after that reunion after several years' absence.

Late in the afternoon, when I finished gardening/farming work and came in the shack with a can of cold lager, I often ran across with her on 40m CW. In several days interval. She has had insomnia problem and always got out of the bed very early in the morning there. Around 2 or 3 AM there. We have yakked on good old days, our cats or even the current issues in the world. I learned she had been a firm believer in democracy. She sounded like a real young girl when she was talking through CW. Very vivid and sensitive. I was not conscious that I was talking to a legendary ham in the US at that time.

Through our friendship, I always felt and admired that she was a lady of independence. Her favorite phrase was that she had been lucky to be able to live independently by herself in the apartment even if she should use the walker or, later, the wheel chair. Whenever she has met hardship in life, which she won't mention about such a thing too often, I was inclined to offer any help to her. She always seemed unhappy at such a proposal or even at such an attitude of me. She has enjoyed social activities, whether it might be for ham radio or not. She always spent a few days when expecting friends or family members visiting her. I could picture how excited she was having them there. Her friends and family members were affectionately caring for her from time to time, I knew. In fact, for the last few days, her daughter in law, Teresa, and her children have cared for her at the apartment.

When I decided to quit radio this summer, she gave me a short note telling me to withdraw that decision. She said ham radio won't be the same for her without me. It was really touching words for me. But I have crossed the Rubicon at that time. It was an honor to me to be told that way, though.

Our very last QSO was on May 8th this year. Again it was late in the afternoon. The remarks in the log says she could not sleep well, 20m was excellent reminding her of good old days and one good thing was that her good friend Nita was visiting the next week. The interval of QSOs was longer. I felt her health condition was going gradually downhill. But, as if we would meet again in a few days, we parted each other. Without realizing that it was the very last one.

It is a big loss for me to have her passing away. But now she is free from anxiety and pain on earth. I am pleased to imagine she is enjoying reunion her beloving son and husband. I would thank all of her friendship through ham radio and wish her RIP. 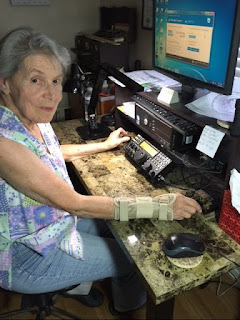