It has been 10 years since the Great East Japan Earthquake today.

A few years prior to that disaster, I and my wife have visited our mother at a hospital in Miyagi. She has welcomed us with the usual gentle and affectionate smile. I was saddened to hear her saying repeatedly she would like to come home here in Tochigi.

On the way back home, we have driven along the coast in Fukushima. I might have written about this trip in this blog before. But it is still an important event for us and I remember of that trip in this anniversary.

It was a peaceful rural area along the coast. Farms and forests were lying on the gentle slope toward mountains in the west while houses, mostly of farmers, were scattered among them. At that time, no one could imagine there would be such a tragic disaster hitting that area. More than 20,000 people have been killed while more than 2,000 are still missing. In Fukushima, that nuclear power plant accident has left ever lasting tragedy to the people there. More than 1,600 died due to causes related with the nuclear plant accident. Tens of thousands of people have lost their homeland, that is, their job, community and the place they had lived for decades. There are more than 40,000 people evacuated from that area at present. Most of them would lose their homeland throughout their lives.

We have learned, rather should  learn two things from this disaster.

One is that we should expect such a devastating disaster any time and get ready for that to minimize the damages. They say there is still geological distortion left along the Pacific ocean off the coast of Iwate Prefecture north of the epicenter or in the northern part of the epicenter. There are a few places which could be hit by big earthquakes all over our country. Typhoon and torrential rain are becoming more serious year by year. It might be related with the global warming.

The other is that the myth nuclear power plants are safe has been totally turned out to be false. The long operation of the plants was not expected when they were built. While they were constructed with the expectancy of usage for 16 years in the beginning, the government is trying to elongate it to 40 years and longer. The plant structures are worn out and the neutron exposure on the pressure vessels must has fragilized it. Such aging issue would bring forth another devastating accidents. Those old plants were designed to tolerate only lesser seismic intensity than the real earthquakes our country have had.

Our government has restarted a few nuclear power plants just in order to let the power line company get profits. The people won't vote against them in elections as if they have forgotten the crisis in Fukushima. The myth of safety in nuclear power plants seems to be reviving in this country.

We relearn these things from the experience 10 years ago. In the next disaster, we might lose everything and won't recover from it. It is not only for ourselves but for the victims and evacuees from Tohoku/ Fukushima.

My mother has died from GI tract bleeding at a hospital in a month possibly due to the stress of the disaster.

The beautiful mountains of Adatara in Fukushima. It was taken a couple of years before the disaster. 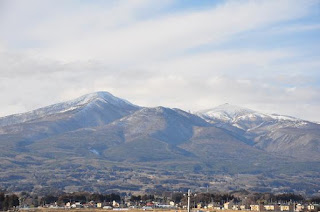