Life together with death

Just next to our home across a street to the west, there is a jr. high school which has a few big cherry trees in the campus. The cherry flowers are blooming fully in a day or two. 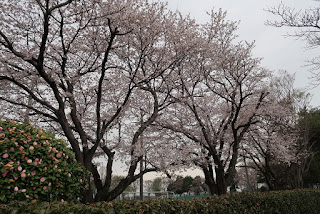 In various SNS in Japan, a lot of the same kind of photos showing cherry blossoms fully out have been posted like this. It is often said that Japanese love these flowers in this season. They come out at the same time and, in a few days, fall in a few days, without hesitation. They invariably add a comment to such article that such characteristics of cherry flowers are resonant to our sense of beauty.
I don't know if it is true or not. But I am still a bit doubtful about it. This species of cherry called Somei Yoshino was produced from two kinds of wild species with hybridization in the era of Meiji. The Meiji government is told to have wanted people to love something new matched to the new era. It has been multiplied with grafting ever since. The present Somei Yoshino is politically given birth and is genetically monoclonal. I could not help feeling something a bit artificial with it.
There are sayings that cherry trees won't live too long. It is not correct. If they are cared for well, they might live long. Even though the monoclonal origin and rapid growth of the tree may make them susceptible to changes in environment.
Investigating about the life span of cherry trees or of the other kinds of trees, I have learned that trees are composed of "dead tissue" as well as live tissue at the same time. Dead tissue work as structure to maintain its external shape. If I am allowed to say it in a bold manner, maybe not accurate in academic sense, trees are living together with death. That is why some of them could live so long as several thousand years.
On the other hand, animals including human beings have lost immortality of individual case trading it with the sexual reproduction. The sexual reproduction assures good quality of life in the species. Our chromosomes have portion named telomere, which decreases in length according to cell division. After 20+ times of cell divisions, it is destined to stop its function. Our cells won't divide any longer and the individual will eventually lose its functions. That is the reason why we get older and eventually die. We traded our own immortality with this effective system to renew the human race.
At certain age of 40s or 50s, we may suddenly start loving trees. I was not an exception. When we are conscious of our mortality, we might be inclined to love trees which still live longer. Their lives look like eternity to our standard.
Living together with death.
Some may say it is good so far as cherry flowers look so beautiful whatever it may come from. That's correct. I might be a bit too grumpy and politically concerned.
I yet won't straightly accepting the full blown cherry flowers.
Posted by Shin JA1NUT at 12:06 PM