The final drive on my Nissan

In this week end, I would say farewell to my car of Nissan, which I have been driving for the past 10 years. It was just after the big earthquake. It is a medium sized sedan with hybrid system. I loved its smooth run and comfortable devices including HDD. Commuting to and from the work on this car, I have listened to a lot of music with it while recording them into the HDD. Possibly more than 200 CDs.

It still runs fine. But I am concerned about the gas mileage and its size, both of which are not suitable for a retired person. Compact cars run at much lower gas mileage while they are much easier to drive in the crowded city area. Those are the reason why I decided to change the car to a compact one. Thinking of my age, wondering if I should get a new one or not, I have made up my mind that way.

For the last long drive on this car, I have gone to Abukuma Mtns, north east of here, along the Pacific Ocean. It is the place where I have taken my family for drive a number of times and have already previously posted some photos in this blog. It took me a couple of hours to go there. The traffic was not crowded at all among the mountains.

Hananuki Valley among the mountains has welcomed me with the colorful trees. It was always in summer when I visited this area. I have never seen this beautiful clors in the forests there. Even on a plain week day, there were a few tourists for viewing fall foliage. The small river was running rather vigorously. This river runs only 13 or 14 miles from the origin in the mountains and had caused flood frequently. There were a dam constructed in it mainly for flood control, which has made a small lake there. 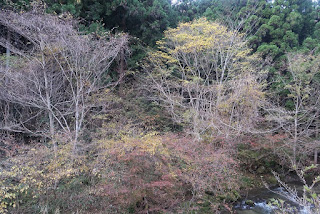 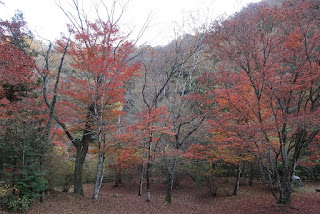 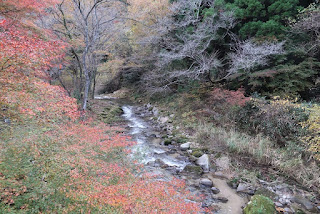 This is the car I say goodbye soon. For the past 10 years, I have had a lot of life events and have driven it whenever they happened to me. It may be a bit funny to the others but I could not help feeling emotional at this farewell. It has made me relieved with its coziness. 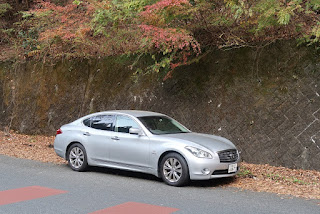