Driving to a height nearby and the hazardous Olympic games

A couple of days ago, fine weather unbelievable for this season in a year has lead me to driving to a height country. It is called Abukuma Height. As I have mentioned that place in another post in the past, it is a height laid between Miyagi to Ibaraki through Fukushima prefecture on the Pacific Ocean side. It used to be an old high mountains having been eroded to present fairly flat height. It always shows the old countryside which I am used to be familiar with. A calm and peaceful place for me to visit.

Another reason why I feel that way is that I used to drive there with family members some 30 or even 40 years ago. Some of them have already gone away. Recalling of them, I have ran through the coast from Ibaraki to Fukushima and then back to home through the Height. Winding roads, up and down, through habitant places and mostly mountain area. Listening to Beethoven's string quartets, Nr 1 through 8, performed by Alban Berg Quartet. The CDs were newly bought recently. The quartet had been active from 1970 through 2008 with real virtuosity. I still have fond memories of the music, which is a real monumental work in the genre of classical music.

In the midst of the Height, I have ran along a small river named Sai River. In a valley, a lot of water has flown on the rocky waterbed. Very quiet place without much traffic. 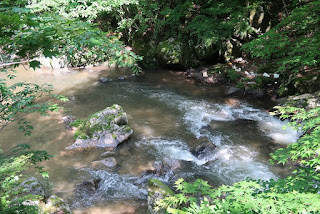 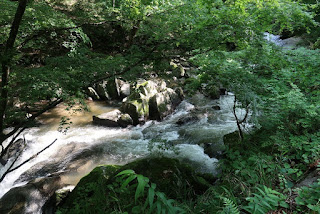 There were a lot of habitant places even deep at mountain skirts of countryside. But I also noticed some of them had been abandoned and had got all to pot. Some abandoned farming fields, narrow in stepwise on the slope of mountains, were also noted. No wonder such places must be increasing all over our country. Our country is going into the depopulating period since the mid '00s. We should consider how to land on such a harsh time without collapse of the society. It is not the time for such as Olympic games. In addition to the burden from the Corona Crisis, the demand for social security with aging and decreasing number of working people is increasing, which we have never experienced in the past.
Even though such serious ideas and anxieties are coming in my mind one after another while driving. But it has calmed my mind and was relaxing me a lot. Even though it was, I again realized, a bit too adventurous for me to drive non stop for hundreds of miles in a day. I have come home safely before sun set.
It will be the day for the 1st shot of COVID19 vaccine tomorrow. I could choose any facility for inoculation here. Accidentally, it was a pediatric clinic nearby I chose. Looking up that facility and the president, it turned out to be a pediatrician who used to belong to the Dept of a med school nearby I used to work for. And the pediatrician must be a student those days and could remember me working as an assistant professor. Hopefully, he won't recognize me tomorrow or he would give me a special big one.
The inoculation rate even of the 1st shot is only around 10% in our country. They still go ahead for holding the Olympic games. It is only for the benefit of IOC and for the government. The top of IOC will be welcomed on a red carpet and will stay at 5 starred hotels. The politicians will be successful at the election ahead later this year if this trial for pan and circus would work.
There could be another wave of prevalence from Tokyo with thousands of people are gathering from all over the world. Quite some of them won't get vaccinated prior to their visit. The pathogen undergoes mutation once in 2 weeks. There could be new mutations of the virus among the attendees during this stupid event, which evade immunity and get more infectious.
The medical system in Tokyo is tightened badly already. The emergency medicine will be threatened to collapse during the event for cases of heat intoxication as well as COVID19. I don't think any readers would visit here to cover stories about it or even to play in it but would never recommend you to do so.
Posted by Shin JA1NUT at 5:33 AM