A CW club named Japan Brasspounders Association has been formed in 2008. Actually, we have not had any club activity excepr for a site/BBS for the members. There seem to be 22 members in this club. Just before the Tokyo Ham Fair being held in Tokyo, a meeting was planned for this club in Akihabara a couple of days ago. I have always felt reluctant to attend such a meeting. But since I retired and became old enough to see friends in eye ball, I decided to join it.

It has been a long time since I visited this downtown famous for electrical items, nowadays for PC and related items. In my teenage days, there used to be many tiny stores in rows there. Some in a building and the others beneath the railway truck structures.  I used to go there once a month grabbing small amout of money my parents gave me. It was a real fun to see around even if I did not have any plan for shopping.

The town didn't hold any trace of those days at all. High buildings with flashy advertisements. Many restaurants as well. Young people who, I believe, look to be the last ones to be a ham were loafing or walking in a hurry on the streets. Quite different from old days. I knew there had been such a change occurring in this town. It was still a kind of disappointment to a radio nut.

At the meeting held in a nice restaurant, 14 people have gathered from all over Japan. Literally, from Hokkaido to Kyusyu. I have ever met 10 of them in person in the past. In a few minutes since I had sat on my seat for the 1st one, Takeshi JA4IIJ came in the room with full smile on the face. It was our 1st eye ball after all of nice ragchewing for the past years. He seemed to have been busy at his work. He is supposed to retire next spring. His location and antenna won't allow him enjoy radio fully at present. He seemed to dream of a remote shack in a mountain in the future. There were the others coming in around the time of opening of the meeting.

I could not omit expressing my pleasure seeing Taka JA1KIH who used to be my company since our teenage days. On his request, as he said in his speech, I have sent a circuit of an electronic keyer on a post card those days. Good electronic keyers were not available in the market yet. I guess a flip flop circuit useing a 12AT7 or something. A saw blade paddle for the keyer. The relay was often broken since it was forced to run the cathode current! He has reminded me of those good old days. He has visited me in Tokyo thosedays and later on at the dorm of the med school hospital in 1980s. He has already retired and has got a nice house in a countryside, where he operates radio for a few days in a week.

Leo JJ8KGZ, the head of the club, and Atsu JE1TRV have made some speech. Leo told us to have the same meeting once a couple of years and to activate the regular schedule on 40m very soon again. Atsu made a speech aredently to activate ourselves on the air. Do not just listen but call CQ. We all gave him amen.

Some of them like Hoz JL1IRB, Mukai JF1TTN or Isao JQ2SFZ expressed their problem that they could be embarrassed when they won't understand a single word in a sentence they receive. It makes them stop copying in head after that. This is what any operators, non native in English, often experience in CW communication. I am not an exception for this problem. But I just told them to forget it! or to ask the other what the word meant. In the context, we should try to guess what it means. If we won't reach the meaning and could guess it is not essential in the context, we could forget it. In case it seems crucially important in the contest, we should ask the other what it means etc. The other may express it in another way or explain about it in more detail.

Each of the attendants have made own speech. How deeply and seriously they have been involved in ham radio and CW! Most speakers have spent even 10 minutes or so! Maybe, some alcohol has made them so eloquent. It was a fun to hear all the stories they have told of. I was encouraged to know they had been trying to enjoy communication through CW, not just 599 QSL QSOs. It is a pity that there have been much less "elmers" on CW especially from the west coast in the US, where we could most easily work with as DX. I have posted on this paucity of elmers in the FOC reflector but no response so far. Most old timers are not seemingly interested in raising those newbies by themselves nowadays.

Some guys at the meeting told me they would like to work with Steve N6TT whom I often chat with on 40m at night. As sson as we finish a QSO, however, he often calls QRZ?. It is just to encourage those listeners to call him. But that "QRZ?" often discourages them to call him, as they said. It might be comparable to ths situation that when a boy decides to say hi to a fascinating lovely girl whom he has yearned for a long time. After hesitating for a while, he decides to say hi to her. At the moment, he hears her saying hi all of sudden. What a surprise to him! Last night, I have told this fascinating guy with beard, not a sexy girl at all, not to call QRZ? but to call those guy's call sign one from another after our QSO. It may ease or force them to answer to him. It is a kind of desensitization to them. Anyway, I hope more experienced guys would do with those newbies in CW ragchewing from now. Isn't it what they have owed to their elmers in their novice days?

I have had a couple of glasses of beer, which were too much for me. A bit staggering, I went back to a hotel in a building next to the restaurant. I was happy to have met those old friends after all. Thanks to Atsu who has organized this meeting together with a lot of his duties for the other clubs in the Ham Fair.

In front of the restaurant; 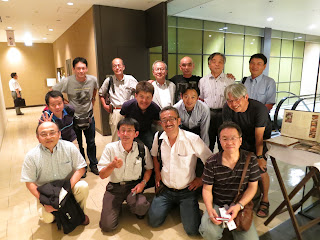