A trip to the west coast; the chapter four

On July 31, we left San Jose for Los Angeles, where another friend of mine, Steve N6TT, waited for  us. It was a short flight. We landed on the LA airport in sunny and dry weather. Steve stood at at the exit waiting for us. His appearance was exactly what we were familair with from the photo. A short pants and a T shirt. His gentle smile with beard face has welcomed us there. He took us to the hotel named Terranea Resort in Palos Verdes. It was about 40 min drive. In some time, getting through the residential area near LA, we could see some resort facilities. Houses with light beige wall and bright colored tile roof along the road. Between those houses, we could see the shining ocean of the Pacific. Finally, we arrived at this gorgeous hotel.

At the reception, I have made the check in procedure. A pretty receptionist has given me a couple of card keys to me telling us to stay at a bungalow. Since we were relieved to come to the destination, we did not care for that at that time. I didn't realize it would make me worried a lot later.

The hotel was composed of a resort hotel and the other types of facilities like our bungalow. The houses were scattered among beautifully cared lawn on a slightly sloped land. There seemed to be a couple of golf courses there as well. Steve went back home after he had seen us being settled down there. 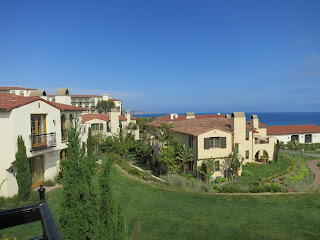 The bungalow had 2LDK with a washing machine, a cloth dryer, a refrigerator and a system kitchen etc. What a gorgeous facility! Later on, at night, I was worrying that it could be a mistake for them to let us stay there! When I asked about it, the receptionist could not understand what I was worryig about. I asked Steve to tell them about my worry. Steve helped us to do that on behalf of me. But they won't give any answer to him due to a privacy issue. The day after, when I asked a concierge about it, he told me they had upgraded the room to a bungalow at check in. It won't  be charged more than the fee for the booked room! They should have explained about it at check in slowly and clearly to a foreign visitor. Is it common that they upgrade the room at check in without proper explanation? A poor retired pediatrician from Japan has worried about it much! 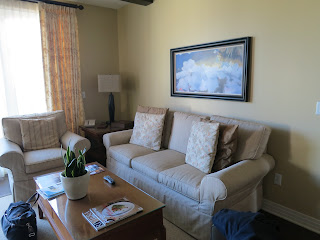 
We have enjoyed a dinner at a casual Mexican food restaurant. The dishes are much bigger than those in Japan. It might be the energy source for American people to fight in the Olympic games. We have had a glass of wine for each, which made my wife a little bit drunken. We have had a good walk along the cliff. It was pretty late but still slightly bright outdoor. Cool breeze was coming over the ocean. There were a number of plants along the promenades, which looked like native in the area. The soil was sandy with rocks made of white sand. 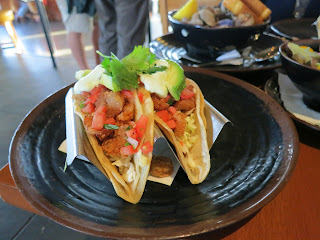 The peninsula viewed from a promenade. Steve told us there used to be the famous big gun, Don W6AM, on the hill over there. There must be a number of rhombics set for various directions there. Don was an elmer for Steve when he started radio in '60s. Steve often tells me of good old days when Don gave him lessons and let him operate his big station. In early '80s, I used to listen to Don's big signal on 40m as well. 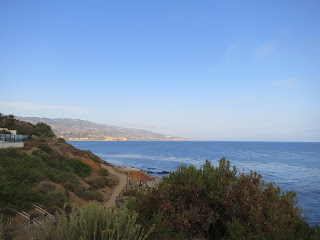 The day after our arrival, Steve drove to the hotel and picked us up to his home. Jim, W6YA, another old friend of mine, was supposed to come to his home. At almost the same time, we arrived there. A beautiful house. There was a big crank up tower with a 3 elements for 40 and a Steppir on it. It took Steve, as he said, a couple of years to get the permission to construct the antennas there.

Steve's wife, Linda, his 2nd daughter Hannah and a dog named Sadee welcomed us as well. Jim has been a big star in DXing for years.  We used to hear his big signal in any pile ups. And he was always one of the forerunners in them. Since I became an FOC member in late '80s, I have enjoyed nice chats with him from time to time. He told us he would go on working for another 4 years as a dentist. He seemed to love his work so much. He has been caring for patients for 3 generations in families. I fully understand him for it was a great pleasure for me to see patients, children of the parents, who used to be patients years ago as well, even though I have never seen 3 generations in any family. Jim was a bright and intelligent person with diverse interests. He used to send me a video clip from a scene in Nabucco, an Italian opera, which was very impressive to me as well.

It was very 1st ever eye ball for Steve to see him after 45 year long QSOs on the air. Steve was also excited to see him there. They seemed to have shared the same friends each other. 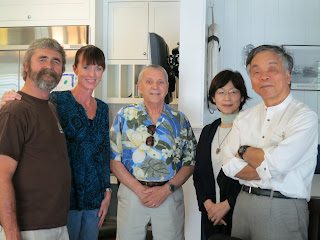 Linda was also a brilliant lady, who seemed to make plans for the family by herself. She has started studying about counselling at a college recently after having been interrupted for that for many years with raising three children﻿ at home school. Steve told she would finish the master degree course by next year. She thanked Steve for his support. Hannah was a lovely girl who was fond of dancing. They have let my wife look around their house.

Here is Steve's castle in the basement. Is there anything else necessary for ragchewing on the air other than these equipments? He has recently approved to be another FOC member. I have talked with John K1JD in NM from this station for a while. He has recently movend there from RI. And his temporary antenna scarecely sent his signal into JA. But at this station, his signal was like a neighbor. 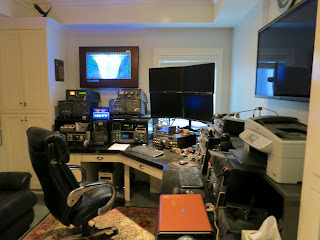 Steve took us to a restaurant in a sea side place for dinner. Again, big dishes in American size! Looking at the young people enjoying some kind of marine sports on the ocean through the window, we have had a great time. Jim has gone home while Steve and Linda drove for us to the hotel. We promised seeing again somewhere in the near future when we bade farewell. Wishing each other's good healthe and Steve's fruitful retirement in the near future. 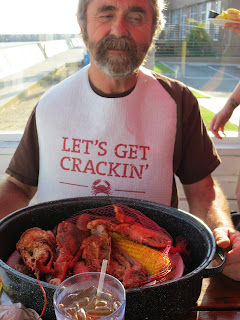