A trip to the west coast; the chapter two 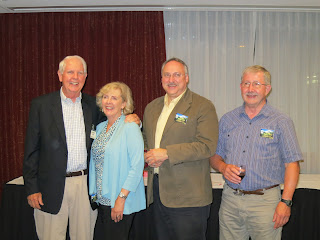 I should not forget giving our thanks to those guys plus Fred W7FU not shown on this photo. Their elaborately planned meeting was not possible without their self sacrificing efforts. From left to right, Bill W7GKF, W7GKF XYL Ann, AC2K Alan and W7QC Steve. So far as I know, they have prepared the meeting spending long time, offered lunch at their homes and gave some attendants transportation and so forth. They have set up K7FOC and W7QC/P at the hospitality suite. The latter was operated by the remote control of W7QC through the net. It was a day before starting this event when President Obama had stayed at the same suite room. Bill sighed saying it was good Obama had gone, which made me smiling. Bill was a sociable and bright person who took the role of the moderator at the banquet. Alan was a young and kind guy who cared for us at various occasions. Steve was what I had imagined before meeting him, a quiet and brilliant guy. I already mentioned about Fred in the last chapter.

In addition, I would thank to Al N6ZI. He has helped me to reconfirm the flight ticket at the lobby of Hilton in the evening before flying to San Jose. Handing over a piece of paper with his phone number, he kindly told me to give him a call whenever I had any trouble during our trip. Fortunately, I haven't needed calling him throughout the trip. I was, however, quite thankful to him for such a kind offer in the country unfamiliar to me.

The day after the banquet was held, we left the hotel for San Jose early in the morning. It was not until we arrived the airport of San Jose and was told by Bob W6CYX about it when we realized that we had forgot my camera at the hotel. What a shame! Rick N6XI has brought it to Bob's home on the way back home. Thanks a lot, Rick.

The airport building of San Jose seemed renewed or newly built since I had transitted there to the east coast 21 years ago. A little bit warmer but still cool air over there than in Seattle. My old friend, Bob W6CYX, has waited for us in the lobby. It has been over 20 years since I met him in person last time. A little bit more grey hair. But his appearance was almost the same as those days. Active, sharp and eloquent talks and much kindness. He took us to a hotel near by. It was not a kind of gorgeous resort but a very comforatble one. A quiet and nice room, hearty service as well as good foods! The hotel named Moorpark Hotel was what Bob had recommended us to stay. 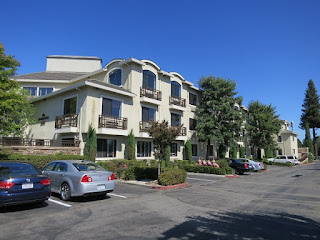 Bob has taken us to his home in the foothill of Mt. Hamilton later, where I used to visit for 3 times if I remember it right. He, Mariko, his wife, and Takie, his sister in law, have welcomed us there. Oh, we won't forget the 5 doggies as well there. The house looked the same as years ago. On the other hand, the garden looked quite different. There were new trees, high redwood trees and various fruit trees, growing. On the ground, there were various kinds of flowers and plants growing thick in the spacious sloped garden. It was a big contrast to the surrounding fields which looked brown with withered and dead plants on it.  Mariko told us she and Takie had cared for them every day.  I have remembered that Bob and Mariko used to hold a party at the pateo over 20 years ago, where I had met good old friends, mostly passed away, like Steve WA6IVN or John KD6SU etc. 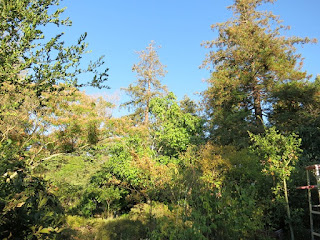 Bob and the family have served us some champaigne and wine. A Brandenburg concerto was on the background. The sun has set. There was a wonderful scenary spread below through the window. It has amazed me a lot when first visited there. My wife exclaimed this as well. We could see the Silicon Valley down there and even San Francisco in the north. 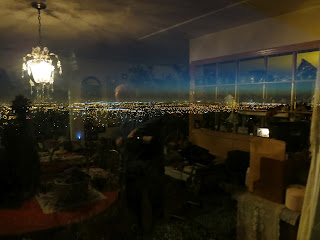 Bob has served us a big and fresh lobster. Very good one. He was eagerly argued against the present government and the bureaucracy. I could not agree with all of his conservatism for a smaller government. But as he took us Los Altos or Palo Alto area before checking in the hotel, I learned the real estate seemed not in a kind of devastation, something like most houses in "for sale" but the people seemed to be enjoying stable lives, although I have seen only a part of the peninsula area, where the economy goes on pretty well. He wanted to stress that point to me. I agreed with most of his anti bureaucracy idea. I have experienced the same thing by the bureaucrats, even if the system is not the same between our countries. I and my wife were smiling to see Bob calling them as junk yard dogs! The pleasant time has passed very fast. Bob took us back to the hotel pretty late at night. 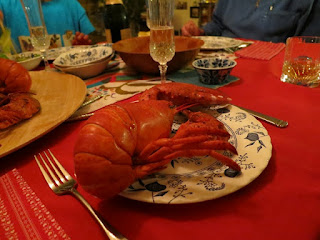 We were scheduled to go to a big red wood tree park in Santa Cruz the day after. To be continued.