A trip to the west coast; the chapter three

On July 30, we got up at 7:30. The hotel served us a great smorgasbord for breakfast. It seems there are pretty large number of tourists or business people from Japan staying at the hotel. They have provided cooked rice as a menue. My wife pleasantly took it. There was a pateo in the breakfast restaurant. In the shaded area, it was cool and dry, which was unusual for this season in Japan. We have had a nice breakfast there.

It was just 10:30, as we promised, when Bob and Takie, his sister in law, have come to the hotel. We headed to the Henry Cowell Redwood Stete Park in Felton near Santa Cruz. On the way, we drove across the El Camino Real or Alpine road, which had been familiar to me. The peninsula mountains were full of green thick trees. Bob explained the clouds from the ocean make much rainfall there, while the wind blown eastwrd gets very dry after that rainfall. 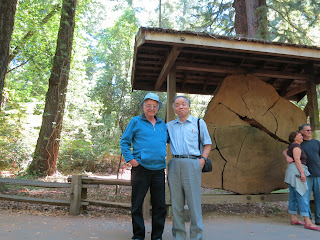 The park was so large that it took us almost an hour to walk around. Bob and me in front of the monument of a cross section of a 2000 year old redwood tree. It is almost unbelievable a tree could live so long as since the birth of Jesus Christ. The small museum for the visitors explained that the redwoods contain much tannin which prevented them from insects like termite. It was another reason why they look red in surface color. Bob was repeatedly amazed at their long lives.

The characteristics of redwoods were suitable as lumber for houses. Many redwoods had been provided for housing industry. This park seemed the only place where old redwoods were left. It was donated to the state by the family Cowell and became the foundation of the park as Bob told us. 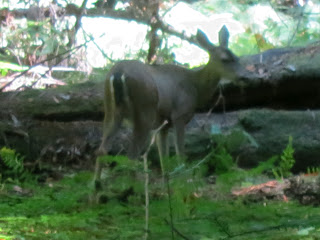 There were deers, squirrels and the other animals in the park. A quiet and peaceful place. A steam engined loccomotive ran on a side of the park between the park and Santa Cruz. Some teenages or families have walked around. 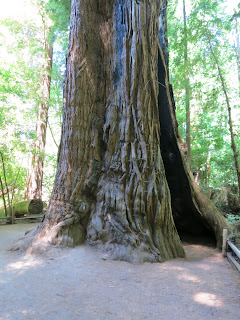 Another big redwood tree. A portion of the root was burnt by lightning hit. There were dozen of those old and high trees up to 300ft, if I remeber it right. The special tour to the redwood tree area Bob had planned for us on our request has satisfied us so much. 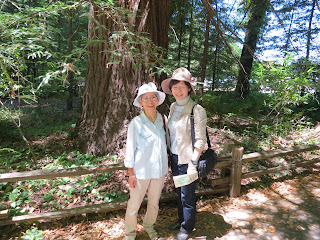 Takie and my wife looked alike as real sisters. The ancestor of Takie and Mariko family came from Awaji Isalnd, which was not far from my wife's birth place. Who knows their ancestors could be folks in the past? Takie was a really gentle and quiet person typical for the ladies in Japan in the past, maybe, before WWII.


We drove down to a seaside of Santa Cruz. I used to drive down from San Francisco to this area on a rent car in mid '80s in my 1st visit to the US. I remebered taking a cup of coffee at a cafe somewhere along the Rt 1. Of course, I could not recall that place. There were a lot of people in the streets, who might be enjoying swimming in the sea or playing at a thema park there. 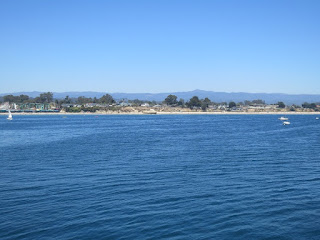 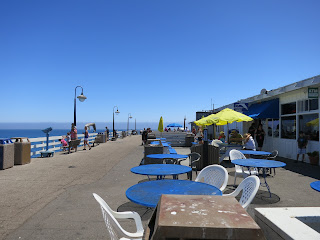 We had a good lunch at a restaurant on a pier there. Nice cool breeze was coming over the ocean.

On the way back to San Jose, Bob told us interesting stories about the Carmel Bach Festival, which he and Mariko had been attending to regularly for many years. The theme was h minor mass by Bach. They have listened to from the rehearsal. Bob was brave enough to propose the conductor in the intermission that, in Bob's opinion, the tympani should play last note of the last piece with a roll, which made better effect for the finale and so forth. The conductor gently replied "No" to him. Then, he met the tympanist smoking outdoor. Bob told him to do what he had proposed to the conductor. The tympanist, from SF Symphony Orchestra, answered him that he could do that. But, after they finished performance, the conductor might walk to him and should tell him "You could do that. But, next time, get my permission before doing the same thing". What a sense of humor! And what a man of bravery Bob is! I scarcely do that by myself. Bob has been interested in Bach for years. He told me he had been studying his works with the scores. A couple of decades or so ago, in a QSO, he happened to tell me he had listened to Matthew's passion at the same festival. The conductor was Helmut Rilling, who used to teach music in Oregon those days. Rilling was the conductor who gave me an overwhelming impression for this music at a concert in Tokyo in my med student days. This episode made me feel closer to him.

I am afraid Bob was so tired from that long drive. Our gratitude to him. We have enjoyed our stay over there. My wife was impressed at Bob, his family, five doggies and the garden. 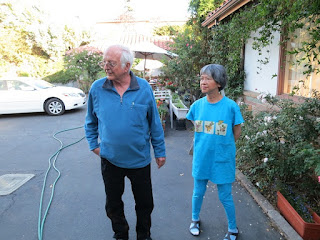