A trip to the west coast; the chapter five

The day before departure back home, we went for shopping in a shopping mall near by. A shuttle bus took us there. It has brought us up to the top of the hill. The driver was a retired person being employed in parttime by the hotel. He told us he had been from UK and had lived there with family for years. The real estate prices, as he told, used to be astronomically high in the bubble economy. It had been settled down and went on at reasonable ranges so far. The economy seemed to be in good shape. It was sunny and hot in the sun. Under the shades, it was pretty cool. It was a shopping mall for the local people. Not crowded. We have enjoyed shopping for an hour or two. 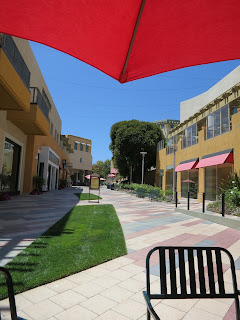 Around a fountain in a pateo, a few toddlers were playing in the water. They were so lovely that I recalled my former patients with a faint sensation of pain missing them at the outpatient clinic. 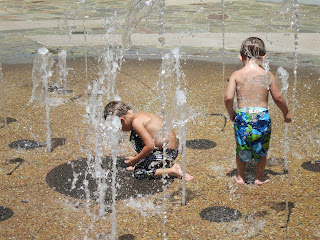 On the day coming home, we have packed everything in bags, not to forget something like camera. I have given a call to Al N6ZI to say thanks and everything was going on well. Everything really went on smooth for us. We were ready to go back home. 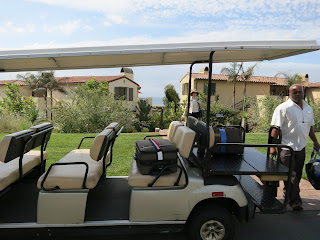 
The taxi driver was a cheerful and sociable guy originally from Trithoria. He told us he used to own 25 vehicles for his company but reduced the size of business to 12, 13 cars. He was the president of a taxi company. On the way from the Hilton Bellevue to the Seattle airport, we took a taxi whose driver was from Ethiopia. That Ethiopian guy told us the economy was getting better mainly thanks to the financial support from China. He would go back to Ethiopia with his family very soon. On the other hand, this driver named Joe was satisfied at the life in the US and would raise his two children over there. Joe strongly supported the Republicans saying those who worked hard should be rewarded. The present government were spending too much, as Joe said, for the social security. On the way to the LA airport, he had a phone call from a customer, seemingly an old lady, who reported him her folk's passing away. It seemed he had had close relationship with some customers. He has handed us a name card and told us to call him for transportation in next visit. A good driver and president. 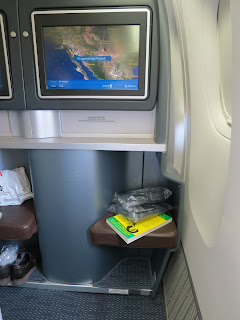 I got a bit of pain in legs while checking in and boarding on. But we finally settled down on our seat of UAL Boeing 777, which were quite good compared with those in the flight to the US. We could lie flat even though the space was limited. The display and the audio devices were perfect. I was so happy to have found the violin concertos of Bach in the repertoire. I have been so excited and stimulated by many meetings and experiences during this stay. It was really fun. But, at the same time, it was too much burden to my mind. I felt I had been mentally very tired. These musics sounded into my mind like water being absorbed in the dry soil. I felt much relieved with them.

Bob Locher, W9KNI, gave me a book titled "The Complete DX'er" which I placed below the display in front of me in the plane. As he told me to read it on the way in the flight back home, I have read it over by the time the plane landed at muggy Narita. This book tells us as if an elmer told every hint and tip in DXing to newcomers. There were a lot of familiar calls in it. It might be because that this book has been written and revised while I was a nutty DXchaser in '80s. In the preface of the 3rd edition, he honestly expressed his losing interests in DXing due to the prevalence of the DX cluster etc. But it was QRP DX which had reactivated his interests in DXing, as it said. This was what I had been thinking of the ham radio. In DXing, when encountering a DX is less probable, it gives us more thrill. The cluster or the internet has given us handy tools for DXing. But, on the other hand, it has worked to make it much easier to work some particular DX. Convienience has ruined pleasure in DXing. Bob has returned the world of DXing with QRP, which lessened the chance of encounter to DX and made DXing more pleasant and full of thrill. DXing is a fun. But it has an end or a limit. We should be aware of this while spending much energy and time for this hobby. I dared to tell Bob, in my mail of thanks to him, to add another chapter regarding enjoyment of ragchewing in the future revised edition.

A pleasant flight brought us back to Japan. Very comfortable. What a muggy weather there as soon as we go out of the exit though needless to say! A limousine bus brought us back to the station near to our home where our daughter was waiting for us. The scenary of deep green rice paddies convinced me that we had made it and finally got home.

Before I left for the US, I had a chance to read over many mails in the PC mail box which I had received from my friends  in the US in March of 2011 immediately after the big earth quake and the nuclear power plant accident. What friendship and fraternity they have expressed in those mails! I could never forget them. It was the time I could see those friends and shake teir hands. Even during this short trip, many people have proposed us for help. I won't forget them in my life. I am sure so does my wife. Thanks again, my friends.


I and my wife would like to return over there in the future. Maybe, with our son or daughter.

Wishing Ed K8RD's wife, Cathy, who could not attend the event in Seattle due to her accident, full and quick recovery. I missed you, Ed.

Thanks for reading these lengthy posts on our short trip. I will keep my fingers crossed for the QSO  and the eye ball with all of you in the future.

Any comment will be appreciated on this blog or by mail.
Posted by Shin JA1NUT at 12:19 PM