A Driving Trip to Hakuba in Shinshyu

I have started writing this post in the end of last month. I should finish it before the content becomes not updated.
~~~
A few days ago, I was enchanted again for a driving trip to Shinshyu by very clear and crisp weather after it had been too wet for the past weeks.
It was not planned precisely before leaving for the drive. I just wanted to feel the breeze starting to blow over there in this season. And, thinking of selling this car I have used for the past ten years, I would enjoy the comfort it could offer to me for the last trip.
When I quit my home around 9:30AM, I said good by to our cat, who came closer to me without replying anything. It has been over a year since he came to us when he was only a tiny kitty. 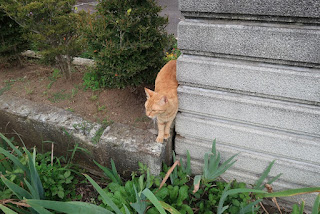 This is Lake Aoki in a valley of Fossa Magna. A beautiful place surrounded with high mountains. It is the lake I and a few members of the university orchestra used to swim without knowing it was forbidden when I was a med student. I have written about this episode in a previous post. The same story would be repeated! in the latter part of this post. It is almost half a century ago! 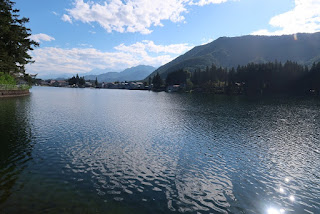 A road running along the lake. Very little traffic. 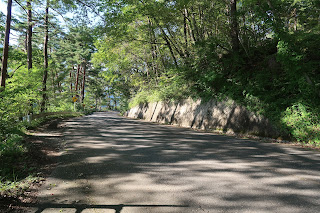 This is the building of the hotel which I and my wife stayed for a day a year or two after marriage. It is along the beach of the lake. We could enjoy the view over the lake from the room. Sadly, the hotel has ceased its business and the building was used for an office of a camper place. 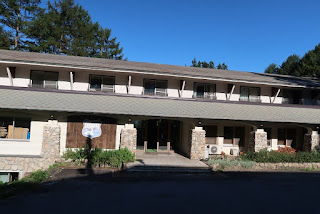 Through its entrance, the lake was visible through the window. 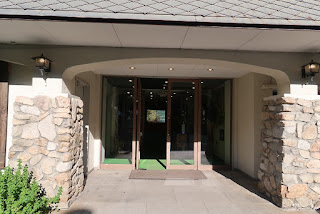 Another view of the lake. Quiet and serene. No tourists around there possibly owing to the Corona crisis. But this place may be empty even without the pandemic. 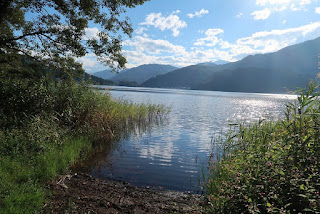 My old car of Nissan at the lake. I have been on this car for 10 years. In the mess of the big earthquake and the nuclear plant accident, it was a symbol of the hope for future for me. I have recorded a bunch of classical music CDs into the HDD of the car and have enjoyed them on the way to various places including this drive. 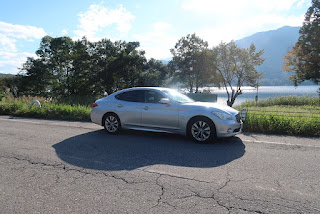 As written in the beginning of this post, I as well as a few friends used to swim in the lake in the summer camp of the university orchestra days. When we landed after swimming across the lake, we were surprised to find a sign telling swimming was forbidden due to the risk by sudden drop of the water temperature in the lake. We used to walk back to the camp place in wet swimming suites. A lot of talking and laughter on the way. This is the road we walked through a range of a mountain. What joy we have had those days! 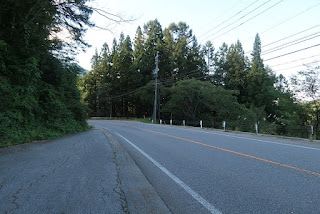 This is the summer camp place of the orchestra. The guest house was still running its business. This is the hall the orchestra used to rehearse. We have been there for a few times for the camp. At the very first time when I was a beginner and was not on the stage, the orchestra was practicing the 3rd symphony of Brahms. 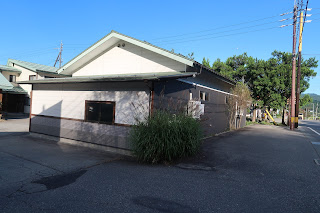 This guest house hall must be used for orchestral rehearsal. An object of a note was hung at the entrance. 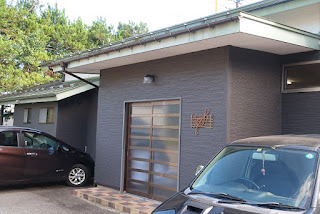 There is a small river running along the street the hall faces to. Quite the same as 40 years ago. The hall has had a bit larger window, I guess. Through that window sunray has spilled into the hall. I could not forget the scene a good cellist had played the 1st sonata of Brahms in a concert within the orchestra at the end of a camp. In reproduction part of the 1st movement, cello starts singing the theme in low voice accompanied by piano playing beautiful arpeggio. Each note of the arpeggio has matched the shimmering sun light coming over the river from the mountains. I might have described about this scene in some previous article, which is never forgettable as an event at the very beginning of my cello life. 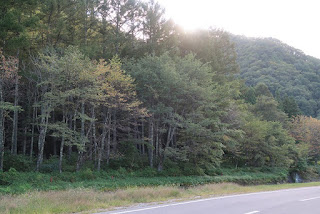 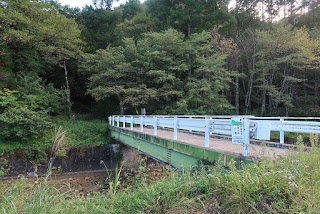 I am so glad to find the same scenes there as in my student days while everything is changing in the world.
The railway station building has been rebuilt since those days. But this view to the station from the railway crossing remained same as before. On the right side walk along the railway to the station, we often walked to say good by to those who left the camp before we did. What a sentimentalism! 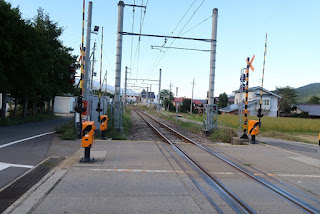 So that is the story. I am afraid I have written the same memory a few times in the past. But this is the unforgettable place for me as the place I have spent the most brilliant days in my life without knowing that. When we are close to the end of our lives, won't we recall such a thing in order to live the rest of our lives?
I don't know if I could return there. But if things permit me, I sure would do it again. I have found a new route through near the city of Nagano in the mountain area...wondering if it was a better one for me to return here. I would bring my wife for the next trip. Purchasing some Oyaki, steamed bread with salty vegetables in it for a souvenir, I have hurried back home.
Posted by Shin JA1NUT at 10:28 AM