On the way to my old office, there is an old tomb site named Bentenzuka. Driving to the town there, I have stopped by the tomb. I don't know when it was constructed. Maybe, 6th or 7the century. This is rather a compact in size. Compact ones were always constructed in later era. Such tombs were constructed for the men of power those days. It is surprising there are more than ten such tomb sites in this city. This area is not necessarily more abundant with such historical monuments than the other areas. They are pretty common everywhere.

What it touches me is that it has been maintainted by the people around this area. In our tradition, we have worshiped our ancestors as gods. I am still moved by the fact there have been generations of people having taken such tomb site as an important monument and having cared for it as it is now. It is still a primitive religion. But the ancestors have had faith in some being supreme beyond our knowledge. It is touching me a lot. It is a relief for me that we have had those ancestors with religious mind.

I sometimes stopped by there on the way back home from work. I felt a kind of relief from this old tomb. 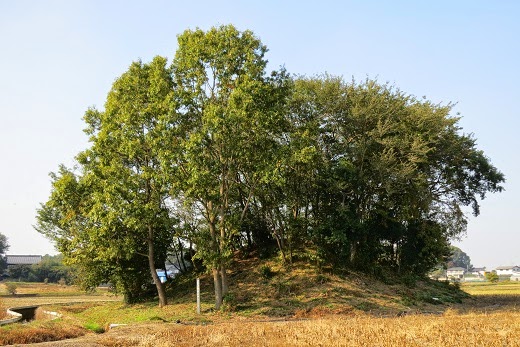 The rice paddies were already harvested. It stood quietly in the crisp atmosphere in the farms.
Posted by Shin JA1NUT at 6:59 PM