I have visited the luthier whom I mentioned in the previous post. It was for regular check up of my instrument and rehairing of the bow. I have mentioned how I knew of him in that post. It has been over a decade since I first knew him.

His office is on the 1st floor of a building. The other tenants than his seemed closed by now. There were a lot of stores or offices closed even along the main street of that city. It is quite common. They call such a street as a shuttered street. Undoubtedly, it is because of the receded economy in such a countryside and the aging and reduced population having started in such a city. 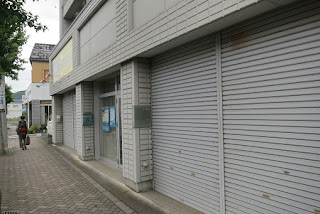 When I came in his office, he was doing some work at his work bench/table. Being aware of my visit there, he stood up smiling at me. It seemed the time is flowing slowly at a tempo particular to him or to his office. He asked me if I had had any trouble with the cello as if a doctor asked a patient for history of illness. Nothing particular. Then, examining the instrument with inspection and percussion, he told me to play with it. Some scales. He told me it was in good condition even though it sounds a bit soft and mellow possibly due to the strings used for a while. He pleased me telling that this instrument was superior to the other ordinary ones. I told him when I bought this instrument made by a luthier in Italy, I thought I should deliver it to some cellist in the next generation as a heritage, even though it might sound a bit exaggerated. It has survived in the mess at my office in the big earthquake 5 years ago. I would bring it to him and ask him to check it regularly. 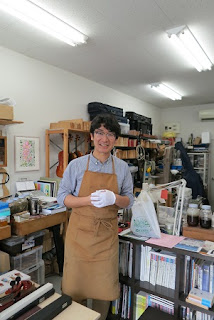 This is his portrait taken at this visit. I have brought some of fresh vegetables cropped in the morning. That was in the vinyl bag beside him.

He told me he was at the crossroads in his life. Lately, he has been wondering if he should extend his business having a disciple or a partner. He is already 37 years old with 2 children. But he was not in a hurry at all. As a luthier, as he said, he was still learning a lot in his work. Maybe, he would abide his time. The work of making instruments requires much study and experience. He could go on working for decades from now. He seems to let himself go with the flow of time in a good sense. That may be why I felt time was flowing slowly when I entered his office.
Posted by Shin JA1NUT at 11:44 AM