We have a number of historical monuments around here. Most of them are not so famous as those in Kyoto or Nara. There are only very few visitors there. Nevertheless, it is always refreshing to visit and stay there for some time.
As Bob W6CYX has requested me to upload photos showing around here, I thought it is not bad to visit one of those cultural monuments around here. That is the Tsuna Shrine and Jizoin Temple in a town named Mashiko, which has been renowned for its pottery products. There is no definite reason why I described the name of those monuments as a complex. But these are located next door each other.
At first, I should excuse for my ignorance of these structures from historical point of view. All I know is that both are estimated to have been built in the 12th century. The temple was established for the clan Ustsunomiya, the leader of this area, those days. It was an era when the sovereignty by Shogun was not stably established. Many people, high or low, relied on Buddhism, I believe. Either is believed to have been transfered here in a later era. A shrine is for Shinto, our native religion, while a temple is for Buddhism. It could mean the close relationship between Shinto and Buddhism in their histories, I guess. But no evidence for that at all.
Anyway, in a hot and muggy afernoon, I left my home on a small car with 1200cc engine. Getting through the downtown of Mohka, our town, I came into a countryside. Many rice paddies looking like green carpets all around. In some 30 minutes, there was a range of hills appearing in the direction I was heading to. There are a few ranges running from north to south. They are not very high all the way but are originating from the mountain areas in Fukushima. I bet this ranges have spared our area from contamination by the radioactive plume due to the nuclear power plant accident. The plume has flown westward to the city of Fukushima and to the coast area southward. The range was the obstacle to our area located southwestward from the nuclear site. I don't know if we could be pleased at it or not.
This is a view from the range over the plain area. Among lower hills, there are houses and rice paddies. My home is 10 or 15 km away from this point. 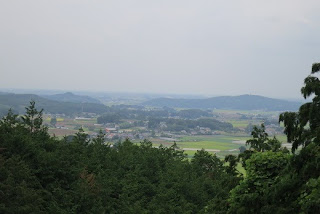 The road is a steep slope. Very little traffic. My tiny car was almost suffocating all the way. Again, I remembered driving here with my children and old mother 20 years or so ago. On the other side of this range, there is a valley, where the destination is located. Not so far from this point. 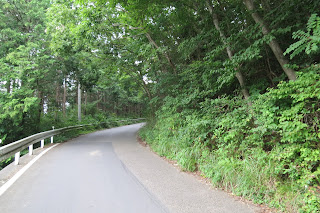 The shrine/temple complex was on a low hill in the valley. Many cedar trees in the property. There was a couple of signs explaining these shrine/temple. One in Japanese, while the other even in English. It was hard to believe that there had been tourists from overseas. There were a couple of guys being engaged in the repair there. No tourists at all.
This is the gate for the shrine named Tsuna, which means a thick rope. This gate seems pretty new. I believe there would be some people in this area come to pray in the new year days as they do in the other shrines all over Japan.  It is not a religious behaviour but just a tradition. Exactly speaking, I doubt there is a true native religion in Japan. They just come here to pray for their good luck in the new year. A kind of greeting. 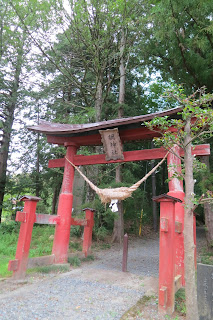 The entrance way to the shrine.﻿ 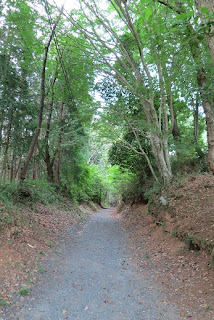 A long way of steps up to the shrine. 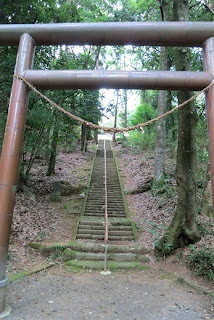 The main building of the shrine. A thick straw roof is remarkable. Old but still well cared for. 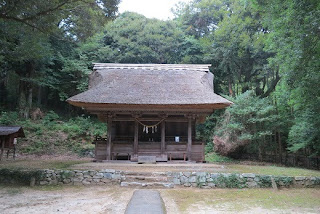 The ehickness of the roof is noted in this shot. Evidently, no nail is used in constructing this wooden structure. A statue of god may be placed inside. A box before the building is the offertory box. Those coming for the hew year's pray will send coins into this box. 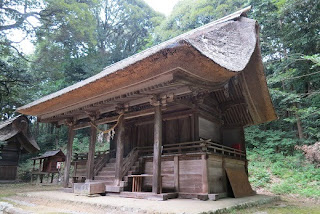 The other building. Smaller one. 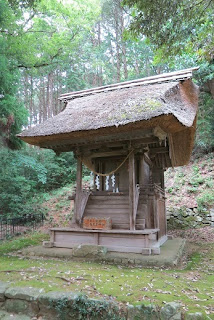 I am proud that our ancestors have built those structures and have kept them intact for so long time. In Shinto, so far as I know, every natural things could be gods for them. It is just for the profits in the present world. No idea of a God with a character. I won't evaluate which is superior to the other etc. It may reflect that our country has not been attacked by foreigners or has never been conquered by any other nations in the past. And we have been blessed with the mild climate suitable for rice farming etc. It has not given us a chance to take religious ideas seriously, I guess. At least, this Shinto monument is still intact here but Shinto is already dead.
It is enough to discuss about religion in my own way. It is getting too late tonight. The 2nd part will follow soon.