Since I retired last year, I felt it was necessary for me to have social activity. I have planed a meeting at the Ham Fair in Tokyo 2013. The main purpose was to meet an old friend, Shun JJ1RZG, who had had a long career in ham radio since 1960s. He has been working as a pediatrician as well. We have promised meeting each other after a long hiatus. There were four other guys who would like to join us there.
JA1IKA, a retired engineer and an experienced musician. He plays violin as well as cello. It turned out that we shared the same kind of interests in ham radio, music, engineering as well as politics etc. I would write about our interests in music in another article. We have had mutual friends in the US as well.
JA7WTH, who is working as an administrative manager at a hospital in Sendai city, has come back on CW after a long interval. He used to work as a pediatrician as well. He was willing to work with foreign hams on CW. The current issue for him is to get a proper antenna for HF better than the present random wire. He looked young and positive for his renewed hobby. I promised him a regular schedule on 40m CW once a week.
JA1KIH, an active operator as well as an engineer. Already retired from his work. I have known him for longer than 40 years for now. Even though not so frequently, maybe, once several years, we have met in person for that period. He has given us some valuable info and tips on the radio and the movements of the administrative authority.
JA3EGZ, whom I first met this time, has been a well known DXer in Japan. He owns a gorgeous antenna farm in Himeji. He is a representative member of JARL and let us know what had been going on in JARL. Now JARL has become a juridical person where only those representatives could be involved in the decision for its policy. JARL is almost bankrupted at present, so that they have decided to impose the annual fee to the life members. Evidently, such a change in rule is against the original contract between JARL and the life members. He has voted against that change at the representative meeting. Hopefully, such representative members as him will let us know what is going on in JARL.
JJ1RZG, an active DXer as well as a ragchewer. He told us he would chase as many DX as possible in the height of this sun spot cycle. He operates at his home in the mid of the downtown in Tokyo. He owns old equipment and an old hand key. He told me whenever he introduced himself as a pediatrician to hams in oversea, quite some of them asked him if he had known of me. I told him the same thing happened to me when I made self introduction to them. An experienced and sociable person.
From left to right:JA1NUT, JA1IKA, JA7WTH, JA1KIH, JA3EGZ, JJ1RZG 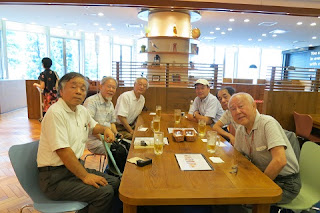 In the meantime, I have looked around the Fair. There were some faces well known to me. Among them, I have talked a bit with JK7UST, K6RB and JE1TRV. Rob, K6RB, visited here to recruit some new members of CWops. It seemed successful. He kindly offered me to come back to the club. I suspended deciding that at present. He is returning homeland onTuesday this week and will get ready for CWT on Wednesday as well as the CWopen in this week end. I wished him a safe trip back to his home in Santa Cruz.
There were some young hams at the place. But the majority was those already retired including myself. I took glances to the manufacturers booths. I was happy to find the booths of some university clubs. Though they were doing with the digital modes.
No new products at the manufacturers' sites. Kenwood has demonstrated several TS990s in pararell on a counter. There were some people trying this new rig. I have just looked from behind of them. The displays looked beautiful. Icom has published a new software for IC7800, so far as I heard. Nothing new at Yaesu. One of the attendants at the lunch has shown a leaflet of SDR produced by a small company in Japan. In his opinion, SDR overwhelms the conventional gears in the function. SDR could be, however, much cheaper those most modern high end equipments. They won't get much profit from SDR compared with the conventional high end radios. That is why the other major manufacturers won't start publishing SDR at present. The users won't pay thousands of dollars for those like TS990 or IC7800 if they could get SDR with half or one third of the prices of modern DSP radio.
I was concerned about the audio quality of CW reception. Don WB6BEE told me at the night that, when experimenting down loaded SDR, it did not sound very good on CW reception. If it is the level SDR could yield as for CW reception at present, it may be sometime before SDR takes over the conventional gears with DSP.

Spending a few hours with the above mentioned guys at the lunch, we have tied the ribbon there. We might meet on the air in the near future. I headed back home without going anywhere. It was fun seeing them in person.
Posted by Shin JA1NUT at 12:40 AM