A story of an old hand key

This morning, when I was working with a stateside with a hand key on 15m, I found the contacts of the key had got worse. It might have been getting even more dirty. Listening the other sending slowly with the same kind of key, I was cleaning it with a piece of paper. Putting it in the gap of the contacts, I tried to rub the contacts with it.

It made me upset when I found the key went silent in my turn of transmission. All in a fluster, I started with the bug. Things went on well. Since the connection cable line was intact, I thought the ball bearings in the key supporting the moving arm were in trouble and made it silent keyed now. I used to try to repair that ball bearings by myself, having lost a few balls in the bearings. Trying to key down the hand key in vain several times, I have remembered all the years being with it. For 51 years.

I was a real new comer when I purchased it in Akihabara in 1963. It was pretty costly for me. Possibly, around 18USD or so. It was like a jewel for me. Soon, it was replaced to an electronic keyer for the main keyer but still occupied the honoralbe place on the desk. In several years, I quit operating radio in order to prepare for the entrance exam for med school. I have discarded all the equipments I had those days. Maybe, I have given something to the others. Nothing left except for this key. It had been used as a weight on my desk for about 10 years until I came back on the air in 1980. It has occupied a place on the operating desk as the only hand key since then. I have got another fancy one from JA CQ Publishing Co. as the prize for the Ace of Aces in late '80s, that was given to the most craziest DX chaser once a year those days. Anyway, this hand key has been the only thing which reminded me of my old days. 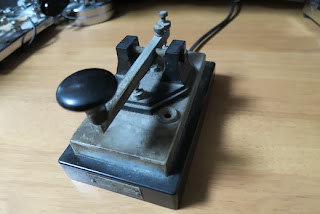 I have given it up to revive this key in a minute or so. It was the time for me to quit using this old one and to place it for a weight again. A bit sad but I felt the key had taught me how suddenly the end of life would come on us.
In a few minute, I have checked it to be sure it was literally gone silent key. I cleaned the contacts thoroughly again. My gosh, it has revived. I could pound it like before. It won't go off duty as a key. It seems it has been getting so dirty that cleaning it once had rather worsened the contacts. It might tell me it would go on for another decade or two until the operator would silent key.
Posted by Shin JA1NUT at 10:47 AM