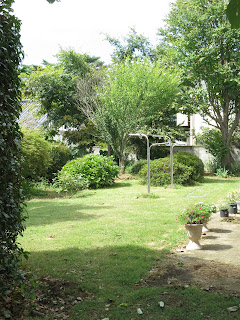 Our garden looks like early fall now. I am, however, still busy at pulling the weeds, watering the lawn and cutting it once in a while. The vegitables are almost over. The persimmons are getting ripe too early before they become big enough. It might be due to the lack of rainfall in the summer. On the other hand, the chesternuts are pretty promising. It will be the season of harvest and beautiful leaves very soon.

It is the time to listen to Brahms now. There are a couple of my friends who insist that there are no music after J.S.Bach. I could not, however, spend fall without listening Brahms. This is the piece which made me attracted to cello so much when I was a med student. At the end of the summer camp of the med school orchestra, we used to have a small concert. Cool breeze was coming through the windows of the hall in a foot hill of high mountains. It was already early fall. A cellist, 1 or 2 years older than me, played the 1st movement of this sonata by Brahms. I might have mentioned about this piece before. It is still unforgettable one for me.

The first movement starts like murmuring in low voice. Melancholy as well as longing for something remain the basic tone in this music. In the refrain, cello sings the 1st theme softly in the same tonality. This representation of the 1st theme is unusual for a sonata. Then, the piano accompanies cello with beautiful arepeggio. It sounded like droplets of dew. The sunray streamed into the hall through leaves of trees around the hall. There were only the cello and piano singing the song. Nothing else. I could recall the scene as if it were yesterday.

The cellist in this video clip, Camille Thomas, plays this piece with much emotion. She puts emotion into every note and phrase. Maybe too much emotion from time to time. Brahms was still pretty young when he composed this piece. A feeling of longing should be heard in this piece as well. Melancholy should not end in despair. The music should sound with not only melancholy but also yearning for something in the future. Thomas is inclined to stress the tenderness of this music. She seems to be indulged in the fragile tenderness in youth. I believe Brahms in his young days would express something more than tenderness. It is difficult for me to critisize such performance by words. Something different from what I feel from this music. Is it coming from her performance style? She still plays it very well. This performance is a pleasant one for me.

My best performance for this piece is that by Janos Starker with George Seboeck. This couple realized yearning melancholy which Brahms must have had in his young days. Starker's cello sounds clear and vivid despite of the gloomy tone in the music. It surely expresses idea and emotion in youth. His technique is perfect even compared with the other major performers. What I felt with Thomas might be because I have compared her with Starker without beng conscious of that. If so, the difference belongs to pretty a problem of individual taste. Considering of that difference, it might be fair to appreciate Thomas. Still, I love Starker's performance best.
Posted by Shin JA1NUT at 12:49 PM