Celebrating our 36th anniversary at a french restaurant in Shikoku

It was our 36th anniversary on Nov. 22. We were on a trip to Shikoku. My wife has booked a french restaurant there yesterday. We have celebrated it there by ourselves. A course of french dishes was served. We have had a bottle of beer. She rarely drinks alcoholnow. It was an exceptional day for her. Saying she would do Romberg's sign on a street there, she and I have had glasses of beer. She used to dance on the street near our mother school after taking some alcohol in our young days. It looked like a neurological sign of Romberg. She was shouting Romber's sign positive dancing on the street. A silly behaviour which was allowed only for young people. The dish shown below is deer cooked with wine. 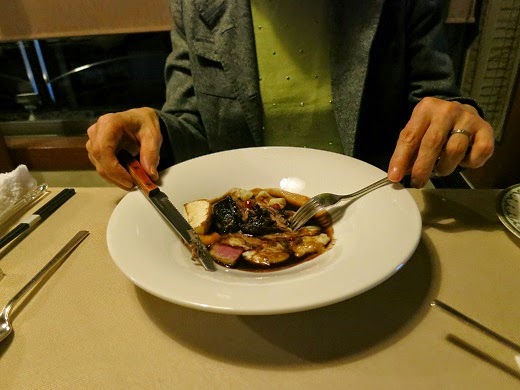 We have met my wife's parents at the assisted living facility there. Father in law has had a cataract surgery recently, which looked successful for him. He was pretty sharp at the age of 89 years. Inquired about the days of internment in the South East Asia after the WWII, he has told a story how he and his colleagues had been in the camp on an island near to Singapore. He was interested in some papers regarding that internment at the same place which was published in the internet. It might be meaningful for him to describe his experience there. I wondered if he could do that or not. Mother in law suffering from Alzheimer just opened her eyes gazing at my wife. Her mouth looked moving as if she wanted to say something to her. Unfortunately, the illness won't hesitate to progress. Her dropping memory still held that with her daughter. She also always looked at her husband when he was in her sight, as my wife told me. Her family was the main thing in her memory, if it was diminished greatly.
We have had lunch with my wife's folks before leaving for home. A nephew has brought his daughter, one year old, to the restaurant. Vivid and lovely. Four generations of floks were there. It was impressive to see life had been delivered from a generation to the other.
It was crowded on the trains as well as at the stations on the way back home. Tired so much, we have come home at 9 PM tonight. Routine will be starting again for us from tomorrow. I have got a bit of gastroenteritis, which I scarcely have had in the past. Maybe, it was due to the tight schedule or to too much foods during the trip. I should take good rest.
Posted by Shin JA1NUT at 11:40 PM