Bill WA6YVT was another elmer for me. I used to work with him on 40m CW in my teen age days. It was usually early in the evening in our time when his sharp bug CW was coming in here. I can't remember what we talked. Only thing I could remember is that he used to tell me to come to his home and to study there. Even though it was impossible for me to go abroad for study, I was delighted to hear such an offer from him. I first knew how open minded and generous an American could be. This impression for American people has never been changed in my mind thereafter.
I have kep this photo of him at his shack. The receiver was Drake R2B while his transmitter/amplifier should be home brew. What a big consle on the floor! BC342 is on the shelf as well. The antenna should be a vertical. On the opposite side of this photo, he wrote his age was 65 years at this time. It also touches me a lot since I am now at the same age as he was at this time. 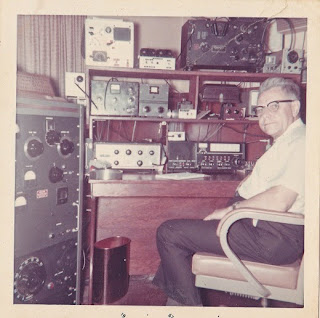 I haven't met him on the radio since I came back on the air in 1980. When I visited the states in '80s for the first time, I have given him a call. I wanted to thank him for his kindness to a teenage boy in Japan in '60s. His family was on the phone, telling me he could not speak on the phone but was thankful to me for calling. Few years later, I knew he had gone silent key. 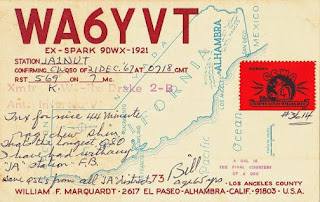 This is his QSL. He was a pioneer in ham radio starting radio in 1921in the era of spark as 9DWX. He was a member of QCWA. He might have loved CW so much throughout his life, I believe. He wrote in the remarks that it had been the longest QSO he had with any JA. I might already be oriented to ragchewing in those days.

Nowadays, such an old timer is decreasing in number. I sure miss him. Maybe, he would tell me it is my turn to be such an elmer for the beginners on CW.
Posted by Shin JA1NUT at 5:45 PM