Bringing my cello to a technician for repair

String instruments require maintenance and repair from time to time. My cello made in Italy has a flaw at the peg holes from the beginning. The placing of the holes were not correct. It was managed by grooving a peg around to avoid intereference with a string running over it. It is functioning OK. But I wanted it to correct that since this instrument is otherwise perfect and is a kind of cultural product which might be used by players of next generations. I am often told that if we maintain an instrument in good condition, it will be handled and used to its best of the capability for generations. I wish this cello with mellow and sweet tone will survive hundreds of years and will be loved by many people.

I brought it to an string instrument maker named Takeaki Ito in Kiryu city yesterday. He used to be trained as a technician at Meister S in Tokyo, where I used to bring my instrument years ago. Meister S used to be a trainee in Germany in his young days and got the Meister degree over there. So Ito has a techinique strict and accurate in German method, I believe. His works look also elegant as well. Meister S was a perfect repair person but was a little bit too far from here. When Ito started going on own office several years ago, I  decided to ask him for maintenance and repair of my instrument. It took me over an hour to get to his shop driving the high way even though it is located in the same northern Kanto area. It has been a year or so since I brought my cello to retouch the injuries on the front board caused by the big earthquake in 2011.

Here is his shop. A small but neat one. 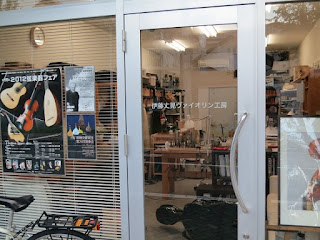 He was painting a brand new viola when I visited there. He seemed quite at home in those procedures. He planed to submit this instrument to an big instrumental exposition held in Tokyo this fall. 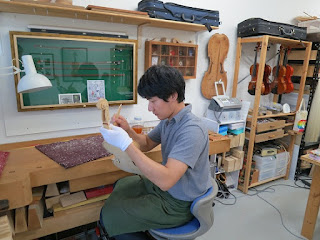 
He is a pretty young guy. A faithful technical expert. Such makers often speal ill of the other's works. But he is not such a person. He makes fair judge on the instruments made by the others. He assured that my cello has been a product of excellent craft.

He told me the business of string instrument making is badly influenced by the economical recession. However, since he got a daughter 2 years ago, he would do what he could do in his business. I fully understood it was a tough choice of profession to have own business since I experienced having own practice almost 20 years ago. I am sure his good work would bring him a success in the future. He was delighted to receive some boiled chesternut from me. 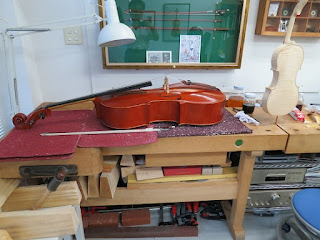 So farewell to my loving cello for a couple of weeks. I will come and bring you back home then.﻿
Posted by Shin JA1NUT at 12:01 PM