It was the day for me to attend to the ophthalmologist today. Just for follow up. I was told to take less number of eye drops for now.

On the way back home, I made detour and went through the roads I had commuted to my office. One end was to make shopping at a super market where I used to go after work in the evening on my way back home. Surprisingly, it has ceased business there. The lights went out while the sign was taken away. The parking lot was closed. It has been there for at least 20 years or longer. It has survived the big earthquake even though the interior seemed to have been damaged a lot, so that they should postpone business for a few weeks. Just cessation of business. But I could not help wondering how the employees were doing. There must be elderly people who had been dependent on it for shopping daily items. The other supermarket near there has been closed since the earthquake. How could they do shopping for living without two of them? It was a relaxing place for me. Sure I missed it.

Again, I felt everything would be changed in time like this. We should just get used to it. No other choice. In a few seconds, I realized it would be my turn to undergo such "a change" in some time. That idea made me cynically smile to myself. The meaning of elderly days might be in the fact that we would lose things familiar to us one by one and it makes us realize what is important to us.

I have posted about Bentenzuka in a previous article here. It is located halfway between the old office and my home. I stopped by there on my way home. Neatly cleaned possibly by the local people. 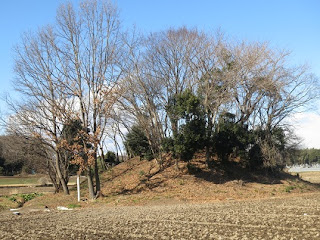 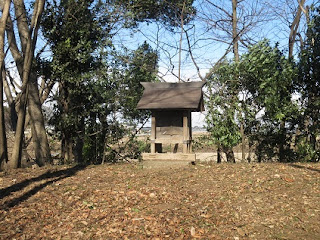 A tiny shrine structure on the top. I wondered what they had worshiped there. I have made a bit of research on it, even though I could not find any explanation on this particular tomb place. Bentenzuka seems to mean a shrine or a tomb for the belief in the guardian diety in Buddhism. It is named Benzaiten. There seem to be hundreds of the places named Bentenzuka all over Japan. It has been introduced into Buddhism from Hindu. Our ancestors have accepted Buddhism in flexible ways. This round shaped tomb must have been for a person of the power in 6 or 7th century, who has not been related with that deity in Buddhism at all. In the later era, people must have started worshiping that deity at this place.

It was a primitive religious behaviour. But I still feel relieved to know that our ancestors have worshiped someone supreme in the world. 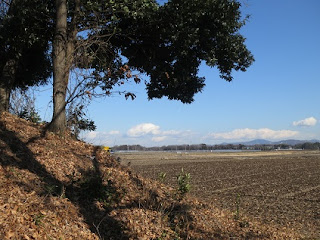 The view toward east from the tomb place. It has been a fun to drive through this farming area with music played loudly.

It is the time for me to prepare for the concert in the end of this month for now.
Posted by Shin JA1NUT at 1:46 AM