An eye patch off

Having finished the surgery of cataracts on the left eye, I have had the eye patch taken away today. It was really annoying to have it. It was also a disturbance to drive car as well since I had to drive with only right eye. As soon as I got out of the clinic without the eye patch, I felt this good weather had invited me for a short drive, even though I fully knew it was not an advisable behaviour for a patient on recovery of the surgery. I could not resist to go out in the crystalline clear sky with mild breeze. I haven't driven anywhere except for a supermarket and the clinic for several weeks. I was wearing the UV cut guard glasses while driving.

Driving 10 minutes from the clinic, I reached a foot of Mt, Tsukuba. It is 877m high above sea level, the most prominent mountain in this area. From Fukushima, there is a mountain range named Yamizo mountains running north to south. This mountain is located the southern end of that range. It is the most conspicuous mountain in this area as told above, so that there are a few communication relay facilities on its peak. There are a famous driving course along the range and a few parking lots along it.

Though imperfect, the mountain had the umbrella like cloud on the peak. The sun ray was so bright as if in spring, which could be thanks to my better vision as well. 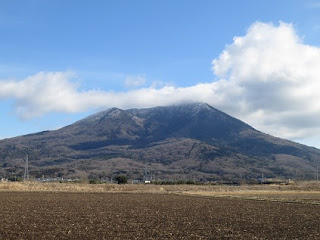 The view over to south from the range. Thirty or 40 miles south west of this place, the city of Tokyois located. Tsukuba city is only a few miles west, where our daughter is working busily. Some 30 years ago, I used to bring family every January here and took photos on the lawn along the road. It was scheduled every 15th of Jan, a national holiday those days. We have done that for a few years. I have remembered of that driving alone the winding road on the range. 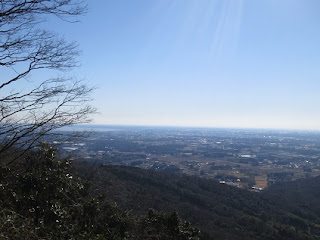 One of the foots of the mountain. Some woods and farms were spreading there. A peaceful scenary. 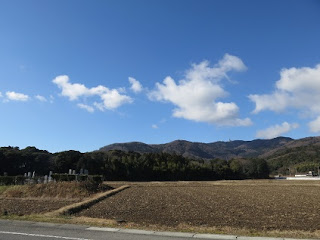 This week end, I will have the practice of piano trio after almost a year long hiatus. Then, a week later, we will perform a piece at a small concert in Tokyo.

What made me happiest with this eye surgery was that I could read the music score without glasses. I would enjoy this period given to me for a while playing with those great company. I should thank the ophthalmologist for what he has done for me. Even though he is an experienced doctor, he might feel a bit stress to treat me. In addition to being an ex doctor, I have not been a loyal patient!