There is a shrine 1 or 2 km south of our home. I have been there twice or so long time ago. When I was working at my own office south of here, I was commuting on a street running along this shrine. I knew it had been a pretty old one. I was not interested in it and would not drop there at all. This afternoon, when it was getting a bit warm for this time in a year, I visited this shrine. Recently, I have been reading about Shintoism. It used to be a native religion or rather a collection of habits among the people. But, in Meiji era, when the government needed a system to unite the people, they combined it with the emperos system. It has grown into the fanatic patriotism before and in WWII. My intersts in Shintoism might have brought me there as well as the good weather has.
My mother used to talk about a festival held at this shrine. A man galloping this entrance road down was shooting a target. It seemed to be a fond memory for her. I don't know when it is performed or even if it is still done or not. There were rows of old cedar trees along the road from the entrance to the worship place for several hundred meters. No one there and very quiet.
﻿ 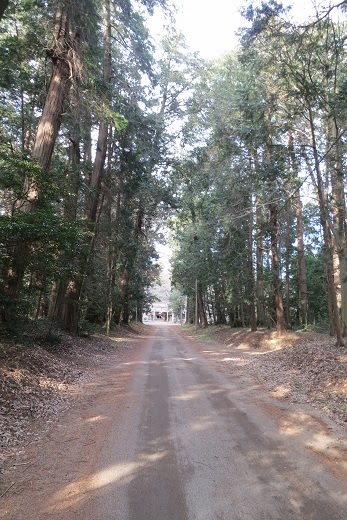 Searching how and when this shrne was established, I knew an emperor had been told to build it in the 7th century. In the 12th century, Yoshiie Minamoto worshiped this shrine on the way for a battle to Tohoku area. It seemed to be a historical fact. This worship facility was built in 1461. Again no one in the worship place. I think there are people coming for worship only in the new years' days etc. No tourists. There are so many old shrines like this all over our country. 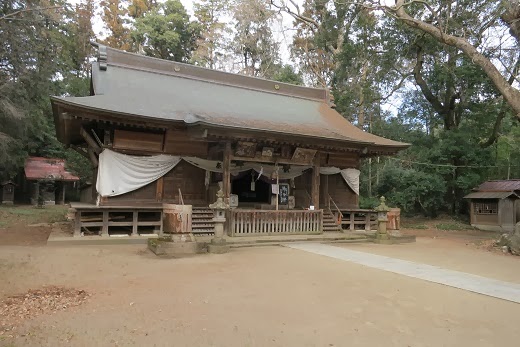 This shrine, one of Hachiman Shrines, worships the 15th emperor in the 5th century. He is a god of military in the relevant Shintoism named Hachiman. Historically, his existence is still quetioned even though some people insist he is the first emperor who could be confirmed in the history. Most likelily, there had been a head of a big tribe who was later regarded that emperor.  The early lineage of the emperor must be mythical.
Having grown up in this area, my mother must have come here and enjoyed annual festivals as told above. I felt I had seen my mother in her shildhood playing along the entrance road there for a while. Of course, it was an illusion. I wondered what she would say if she had known that I got interested in and visited this shrine. I wished I could converse with her about it and the other many things.