A drive up to the mountains

I have made a drive to a high land marsh north west of here. It is named Senjyogahara, which means a battole field in japanese. An old legend tells there have been battles among the gods in the mountains over there. It seems what the name came from. It belongs to a national park.
I used to drive up there a few times in the past. Years ago when I was driving to my office, I often looked up there and, leaving all the duties behind, I would go for driving over there. Of course, it has never come true. It was the chance for me to do that now. It was not, however, so exciting as I had imagined since I quit my work for now. The more duties I had those days, the more fascinated I felt by the scenery in the mountain. That may be the truth.
I used to come this area once a month for work. I stayed at a hospital for all day from Sunnday morning to Monday morning. My duty was to care for all the outpatients as well as the inpatients. It could be a real burden to a young pediatrician. But I didn't feel that way those days. The hospital was still there on the way to the mountain area. It used to be a private hospital and has become a municipal one for now. Early in Monday morning, I used to buy some bread at a store on the opposite side of the street and rushed to the dorm house in a med school where my wife and our elder son were waiting for me. The bakery was already closed there.
Travelling in woods this time in a year is called as "hunting for the colorful foliage" here in Japan. The fall has been deepened there. The colorful leaves have welcome me. Some of them have already fallen on the ground. I went up steep slopes to a lake near to the marsh. 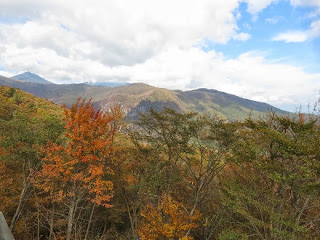 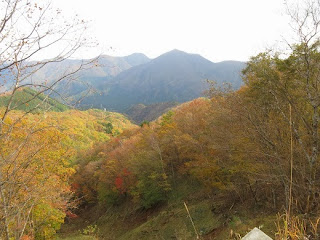 There is a big lake named Chuzenjiko at almost 3000ft of altitude. It was quiet on the lake even though the traffic was still terrible around it. There were a number of souvenir shops at a shore. Being off kinda season right now, some of them were closed. In summer, there should be many people enjoying boating on this lake. 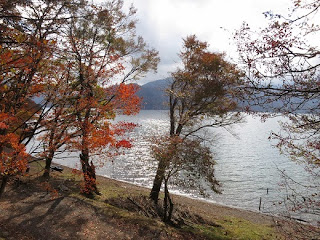 A famous hotel restaurant along the beach. I gave up taking lunch there since it was full of people. The bakery I used to buy bread on the way home from the work at the hospital belonged to the same hotel. 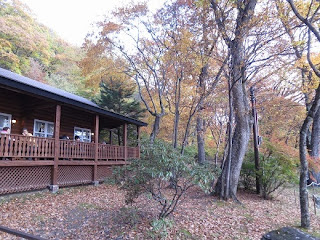 Finally, I arrived at Senjyogahara. It is a marsh born by the activity of a volcano stopping flow of a river. It is about 3500 ft in altitude and has 400 ha of land in it. It was covered by dead plants of low height. Again, very quiet. It was late fall there. But the breeze over the marsh was a bit warm. 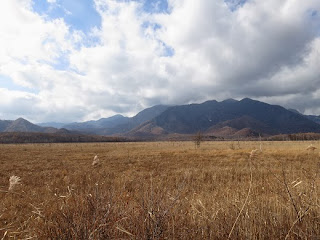 There were a number of trees standing in the marsh. The marsh was surrounded by high mountains. A river was running in the center, which ended as a big fall on the south eastern corner of the marsh. 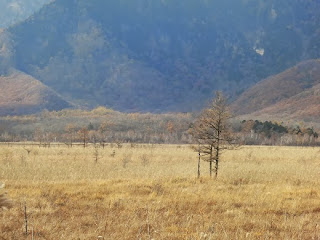 White birch trees were beautiful there. There were clusters of the other kind of trees as well. There were groups of pupils taking lunch under them. A peaceful scenery. 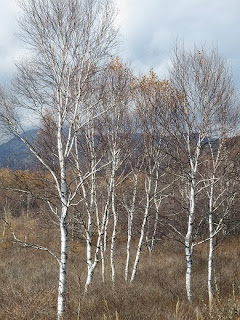 Having gone up a mountain on a winding road, I got through to village on the opposite side of the ridge. There were much less tourists. It was much more favorable. I forgot taking photos. When I asked a girl at a souvenir shop if it was always so quiet without many tourists, she answered there would be more people when it got late fall. Uttering that it has been already late enough, I bought some apples there for a souvenir to my wife. I would bring her there next time.