I have heard a radio parts mall in Akihabara, a downtown famous for electrical items, would be closeed tomorrow. I wanted to go there before it was closed. I left for Tokyo late this morning.
The radio parts mall, under the reailroad, is composed of three divisions. I knew only one of them would be closed. The photo shows the entire mall on the opposite side of the street over the pedistrian crossing. The history says it was constructed 64 years ago. One of the three divisions named the Radio Store was closed. 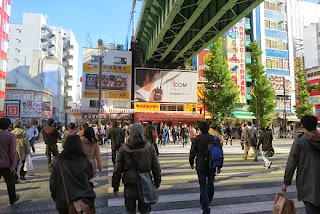 The mall was not very crowded. Several people were taking photo of the closing mall. Along a narrow passage, where just a couple of people could go through, there were small shops located on each side. Each shop was about 2m wide and 1.5m deep in size. There were always one or two personnel in the back of a shop as this photo shows. Every shop had its speciality. This shop seemed to sell mainly tiny parts of resistor or capacitor etc. Since my teenage days, this outlook has not been changed at all. Most of the items sold there have been changed. I used to attend there once a month grasping small amount of money in a hand. What thrill I have felt looking around for the parts I needed those days! 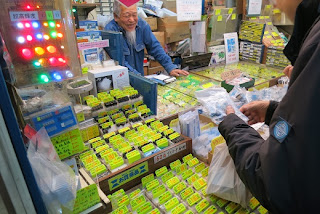 There were some foreign people enjoying shopping there. It was the same as in old days. All I have bought were a coil of solder, a soldering iron and a microphone for FT2000. The mic replaced an old one with a trouble and is used for PTT on CW! I should say I got a new stand by switch in stead. 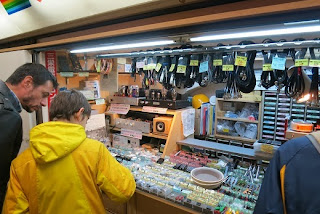 It was a fine beautiful day. I have walked from Akihabara up to Ueno. Since my mother school was near there, I used to walk this street in my student days. Gingko trees along the street looked beautifully shining. 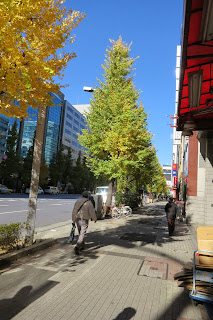 It is a lake in Ueno, named Shinobazunoike, located the western side of Ueno Park. It was at a restaurant close to this lake, where a reception for my elmer, Ralph, WB6BFR, and his wife was held in late '60s.  I and my wife have walked around there as well. A lot of memories. It took me an hour to walk there. I was happy my feet did not complain of such a long walk yet. 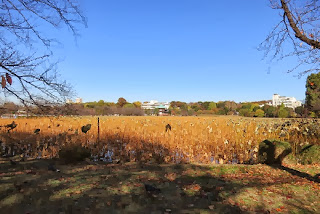 I was pleased to know all the mall won't disappear. It seems, however, such shops won't go on for too long time since there would be less necessity for such radio parts and the internet shopping might replace it. Anyway, I wish them good luck in their business. It is still a place of my fond memory.
Posted by Shin JA1NUT at 10:20 PM