The old tomb in spring

I have been trying to learn when and how this ancient tomb, named Bentenduka, was constructed, which I had posted on this blog for a few times. Unfortunately, no definite info was found. Comparing it to the other tombs with the same size and at the location near to it, it might be built in 6 or 7th century. In the last age of ancient tombs. It is always amazing how many such tombs are in this area. Dozens in the norhtern Kanto area.

Recently, I have learned about a military commander named Masakado Taira, a descendant of the emperor Kanmu, who used to be a power in this area and to have died tragically after rebelling to the emperor in Kyoto. He is believed to be one of the origins for Samurai. It seems there have been a lot of wars or of conflicts between powers in this as well as the other areas in Japan those days. People were, intentionally or unintentionally, involved in the wars/conflicts. I believe people have had a pessimistic view of life in the age of wars and might depend more on religions, whatever it might be, than the later ages.

As I told before, in such a hard age, people in this area might worship at this tomb for their ancestors as a primitive religious behaviour. Knowing of the history a little bit, I could not help feeling this old tomb closer to me. It has seen so many people who got tired of or discouraged living in this world.

The farmers have watered in the paddy around this tomb. They have started planting rice by now. This photo was taken in the end of last month. 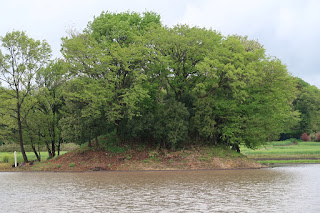