Fishhead soup of red snapper. Much ginger was added in it. 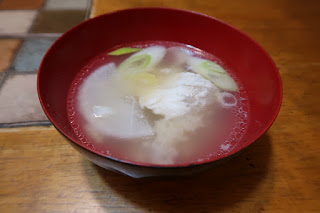 Around 40 years of age, in late '80s, I quit a job at med school hospital. Before starting at another hospital, I have taken a bit of vacation. I have made a drive trip to Shinshu area, a favorite place surrounded by high mountais and a memorable place where we used to have the summer camp of the university orchestra back in '70s.

Driving along Himekawa, running in the western end of Fossa Magna, I have gone through a steep valley. Very few cars were running. There used to be a bad damage from massive rain fall thereafter and the road was modified to a straight route from central Nagano to Itoigawa city at the coast of Japan Sea. At that time of my drive trip, the road was going on the bottom of the valley or the slope of the mountains in either side. Driving that winding narrow road was a bit risky. I still enjoyed it. On the way to Itoigawa city, there used to be a open air hot spa at a river beach of Himekawa. The big bath tub like a swimming pool, a dug one, was filled with hot spa water from elsewhere. Very few were bathing there. A small plain area was spread at the end of the way. It connected to a truncal road running along the Japan Sea. At that place, there used to be a restaurant mainly for truck drivers, named Goyoh Suisan. After a long tiring drive, I have taken lunch there. The menue was fishhead soup. I can't remember what kind of fish was featured in it. It was still gorgeously delicious. Sure I felt revived with that dish.

This menue reminds me of that drive. I wonder if the restaurant is still running there. Someday, I would visit there again.