Azalea along the entrance has passed its peak of blooming. They could have been more luxurious. My wife says we should prune the branches in order to have more room for air flow in the tree. I would do that when flowers are all over. 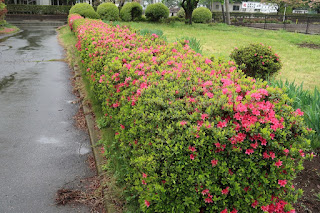 This azalea in a row was planted over 20 years ago when my father was alive. I can't remember who has done that. Or maybe we have asked some gardener to do that. My father had cared for it until his health issue didn't allow him to.

This photo shows the row of azalea about 10 years ago. It bloomed gorgeously. 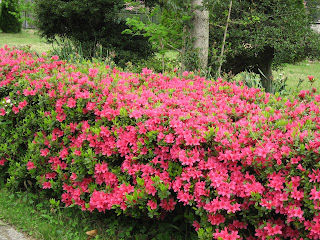 When I started own practice in a city nearby 24 years ago, my father was enthusiastically caring for the plants and trees in the property even though there was no large room for that. Azalea was planted again in the flower bed on the sides of the parking lot. This photo shows that about 10 years ago. 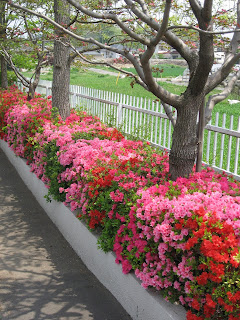 He has worked hard for us there. It was the place for him to work for a family member, that is, me. He has been yearning for such work with me at my own clinic since I became a medical student! I didn't care for a life as a country doctor far away from research etc. But, aside from my wish those days, things have lead me to this countryside and have made me live as a general pediatrician there.
Throughout his life, father has served at the other hospitals and clinics in Tokyo after coming back from the WWII. It was not always easy for him to work being instructed by the owners of those facilities. I was sometimes told by him about how difficult it had been for him to work at such places. At my own practice, now, he could do whatever he thought good for me and for the patients, even though he was not a full time worker. He might be happy to be treated as the father of the boss by the staff. If I could ever boast something I have done for father, it was the only thing that I gave him a chance to work with me at that time. Actually, his work has been a great help to us.

This azalea brings me back to those days. And it also tells time is passing fast. So far it goes on blooming every spring, it is a token father used to live here.