A memory of sushi dish

When I visited my wife's family in Shikoku for the first time in this season in a year, her mother made a great sushi named Oshinuki for me. It is the dish shown above. It features spanish mackerel and green pea. Both materials were in the best season in a year. Oshinuki might mean something pushed through. I believe it was made with a "mold".

It has tasted very good even though I could not fully enjoy it before asking them to let me marry with their daughter. Having only two daughters, they wanted us to live with them. Her father used to mention about a newly founded med school close to their home, which he seemed to want me to work as a resident. It was hard for me to accept that plan. When I didn't say yes as for the training plan as a doctor, he answered to me he would consider of our marriage with a kind of gremacing on his face. He looked serious to me. How could I enjoy that sushi in that situation?

Later, my wife told me they had already agreed with us as for marriage at that time. Father in law has made things in right order not answering to me immediately. Those days, there was no bridge between Shikoku and Honshu. While seeing my wife saying good by to me with a big smile, I thought that could be the last trip to Shikoku and she had been too innocent.

Anyway, I could have this Oshinuki 2 or 3 times since then. Sometimes, I asked my wife to learn how to cook it from her mother. She always answered it had been her role to enjoy it but not to make it. At least, the tradition of cooking this sushi in this season would be abandoned at this stage of the family tree. Mother in law is still too old to teach this dish to the others for now.

In stead, I have tried sushi with minched tuna. Ugly shaped but still pretty good. Should I learn cooking Oshinuki by myself? 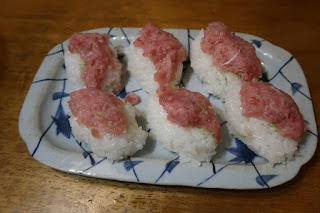