I have cleaned the garden. Burnt some cut branches of the trees. Raking fallen leaves among the strawberry plants with a hand, I found a flower of strawberry coming out. 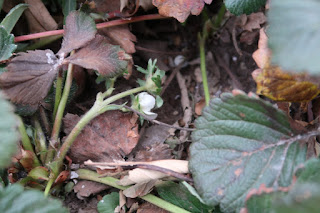 A tiny flower in the shade of leaves, which might guard it from frost early in the morning. I don't believe it will bear a fruit. It is expected to bear fruits in April. Nevertheless, this tiny being has convinced me that time is flowing to spring now.

I have watched and called CQ several times on 40m late at night. No callers even though a number of the stations in the US has reported my signal between 20 and 30dB by the RBN. The band was noisy typical for snowfall. Looking outside through the entrance, I found small amount of snow had been on the ground. This afternoon, it was rather warm for this time in a year. I believed the forecasted snow won't lie on the ground if it ever snowed. A quiet and a bit chilly evening.

I have heard from Jack W8KR that the forecast had told them it would be minus 46 degrees C in MN. News also said 12 people had been killed by this cold snap. I hope every friend in the US would not be disturbed or even hurted by the cold weather.
Posted by Shin JA1NUT at 12:47 AM