A friend of ours has brought us "dried sweet potatoes" yesterday. Her husband and she herself, living pretty near here, have been good friends of ours for decades. Her parents in law used to be closely related with my parents when they were young as well. Even since the prewar era. 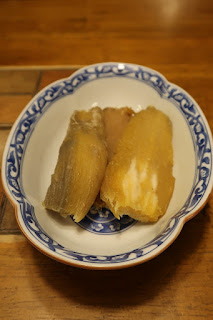 She said her husband had grown these sweet potatoes and had dried in the garden by himself. Nothing is more elegantly sweet than this one.

In the past, I have brought some dishes to them like chinese dimpling or fish dishes. They have been pleased to have such dish present from me.

In a morning, over 30 years ago, I used to be called by them on the land line, screaming for help to me. One of their children, one of the twin daughters, when she was a toddler, has fallen into the bath filled with water by accident. It seemed she was still weakly breathing despite of cyanosis on face. Heart was beating. After making resuscitation, I have taken her on my car to the university hospital I was working. She has left with cerebral palsy and a little mental retardation due to hypoxemia in the accident. But she has grown a beautiful girl. She also has attended to the ordinary school but not a school for handicapped. Whenever I visit their home, she comes to see me with brilliant smile. She is still going for work at a factory by herself everyday. I am sure her parents are proud of her.

Since this accident, we have become closer each other. The husband's father used to come to see me at the clinic for some treatment for his asthma. I believe he would help me financially at the new business. He turned out to be a radio operator in his army days in the end of WWII. Later, in the last days of his life, I knew he had been interested in ham radio. He told me he still remembered of Morse code in Japanese. I should have let him taken a ham ticket or at least let him listen to radio with a simple receiver. In his last hospital days, I have brought some magazine of ham radio. He has told me of good memories of R/O trainee days.

All members of this family believe in Christianity. This younger couple has know each other when they were studying at a high school named Yamagata Christianity Independence High School, which had bee founded by a great teacher and priest in the WWII days. I have a few more people who have spent young days at this school. without any exception, they are faithful and good willed people. I don't know if it is the result of the education they have had at that school or those people would attend to the school. Anyway, it is unberlievable the graduates of that school are invariably such good people.

It is an honor for me to have an acquaintance with them. I would treasure our friendship. Not often seeing them, I still feel pleased to see each of them or the other family members.
Posted by Shin JA1NUT at 12:15 AM