Not to have ghosts of the prewar regime revive

This photo showing the leaders of Constitutional Democratic Party worhipping at the Ise Shrine was a real shock to me. It is not a private worship but united religious behavior of a public political party. It could not help giving some political meaning itself. 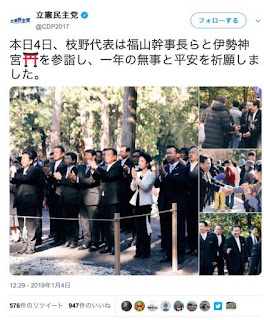 The CDP is thought to take a leading role in combining the opposition parties against Abe LDPJ. The latter dominating the administration at present is aiming at revival of the nationalism in the prewar era. The prewar nationalism was based on the State Shinto, having worshipped the Emperor and his family as well as the Ise Shrine, lead to the devastating defeat in our country and the terrible damages to the countries in Asia and the US. Worshipping Ise Shrine means to approve that State Shinto.

The Association of Shinto Shrines has published its Charter in 1980. It advocates worshipping Ise Shrine, a shirine worshipping the ancestors of the Emperor according to the old mythology in addition to the Emperor as the State Shinto did before war. It also has an object to establish Shinto as the state religion as in the prewar period. GHQ was thought to have dismantled the State Shinto after the WWII. But it was not perfectly done and has preserved the system of Imperial Rituals. It could be only imagined but GHQ might have thought they would utilize the religious system in our country in order to govern the people.

The problem between politics and religion is much more subtle and deeply involved in our culture/society. However, the rule of separation between religion and state politics has been established after harsh experiences in the history in the modern nations. Our politicians, especially those against the ultra right regime aiming power, should learn it again.

Not to have ghosts of the prewar regime revive.
Posted by Shin JA1NUT at 12:17 PM