Another sentimental journey to Tokyo

I have been down to Tokyo in order to attend a small ensemble rehearsal. It was a place near to a university, where we used to have rehearsal of the university orchestra regularly held in the week end in my med school days. I was intending to look around the area I spent those days after 40 plus years absence. Another sentimental journey.

At the beginning of the trip. My "Rosinante" and "the sword". 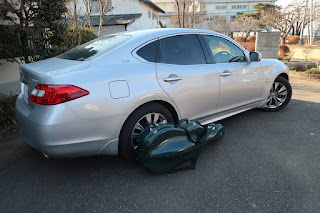 It was forecasted we might have snowfall at sometime in a day. Looking warm sunray, however, I was sure the roads won't be frozen even at night on the way back home. I wanted to avoid being in the crowds of people in the downtown flu had been in an outbreak when I went there on train. I decided to drive down there.

I have ever been driving through the relevant street there for a few times since I graduated from the school but never went there on foot. Without knowledge of parking lots there, I headed to the area. As I took off the high way in Tokyo, I found a lot of small parking lots everywhere. Some houses whose habitants were gone might be demolished and were replaced to those parking lots. The tax for the property is extraordinarily high in the downtown of Tokyo and is not paid off without income from such as parking lot, I guess.

Anyway, I have parked at one of them near the place of the ensemble. Bringing that heavy cello in the hard case, I walked along the street where I used to in med school days as a cellist of the university orchestra in order to attend the rehearsal. This is the entrance gate of the university, Ochanomizu Women's University, of the orchestra rehearsal place mentioned above. Our orchestra was allied with the students of this university and had more than 100 members those days. At first, having been a student of a college with exclusively male students before entering the med school, I have never been to a campus of such women's university in the past and was pretty nervous. However, there were a lot of boys walking in the campus. I became used to going there very soon. Anyway, the entrance gate and the entrance street toward the hall named Kiindo lined with gingko trees were how they were 40 plus years ago. I used to walk through it to the student hall on the back of this hall every weekend and even more times. A place of old good memories. After the rehearsal there, I used to walk back to the street with some good friends. Talking of many things from trivial to seriouly invilved in our lives. With heartfelt nostalgia, I wondered how those old friends are doing right now. 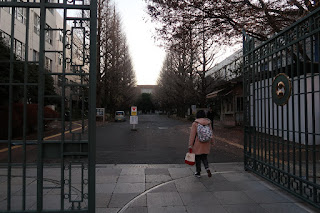 A notice before the gate said anyone who would enter the campus should own a entry permit. I knew I would have been regarded as a geezer guy if I would tell the guardman I used to be a cellist of the orchestra of this university 40 plus years ago and would like to look around the campus. Giving it up, I headed to the subway station on a street of slope upward. Surprisingly, the street was lined with a lot of high buildings, mostly of apartment, which we never had 4 decades ago. I wondered if there would be habitants in 10 or 20 years there. It will be the age of population onus phase with reduced population. At that time, will those buildings be pulled down and would the town look like long time ago? 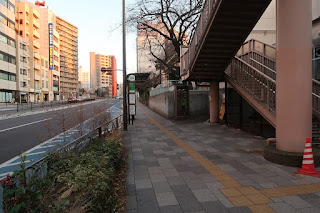 Steppind down firmly the sidewalk toward the subway station, I wondered what I was thinking of when walking this way 40 plus years ago. Music, professional studies, friends in the orchestra, a girl friend or anything else. It is evident I have never looked around the scenary or the buildings. Just looking straight ahead. Now, at the last chapter of my life, I could look around and try to find anything which brings me back to those old days.

At the small ensemble, I have enjoyed playing cello with repertoire like a minor violin concert of JS Bach or Oblivion by Piazzolla and talking with young friends. Time has flied away so fast. On the way back home, I had to drive on the high way with pretty crowded traffic. It was like a jet coaster for me. I could not help feeling my sight was being dteriorated and it would be soon when I could not drive that way any longer. At midnight, I could come home safely, though.
Posted by Shin JA1NUT at 3:40 PM